The Chase is on!

Holiday World has teamed up with Owensboro RV, Pepsi Co., and local radio stations WBKR, WKDQ, and WJLT for The Great Cheetah Chase!

A field of 64 listeners will be narrowed to two teams to race on Sunday, August 15, 2021 for the grand prize:
2021 Puma 16QBX from Owensboro RV
Three Holiday World & Splashin Safari Season Passes
A year’s supply of Mountain Dew product

**There are no prize substitutions and the winner is responsible for all associated taxes and fees.**

The 2021 Palomino Puma Ultra Lite 16QBX is equipped with a 13′ awning to cover almost all of the camper.
You’ll be surrounded by LED lights, that are under the awning, while you enjoy the great outdoors.
The aluminum solid double step is the perfect entry to your new camper! 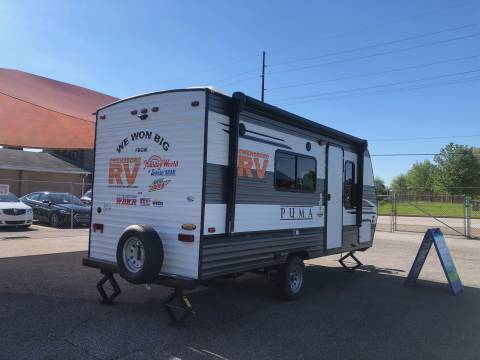 92.5 WBKR– Starting Tuesday, June 1st, listen to Chad and Angel each weekday morning (6 am to 10 am) and the Drive Home with Dave Spencer each weekday afternoon (2 pm to 6 pm).  When you hear the Cheetah Chase cue-to-call, be caller #92 at 270-926-WBKR, 1-800-844-WBKR, or by using the CALL US button on the WBKR app.  The qualification schedule is as follows: From Tuesday, June 1st through Friday, June 11th, on-air qualifications will take place once per day during The Morning Show with Chad and Angel and The Drive Home with Dave Spencer.  Starting Monday, June 14th through Thursday, June 17th, there will only be a daily chance to qualify during Chad and Angel’s show.  WBKR will qualify 22 listeners for the grand prize event.

99.5 WKDQ– Starting Tuesday, June 1st, listen to the Q Crew Morning Show with Ryan & Leslie weekday mornings between 6 am and 10 am, and the Ride Home with Travis Sams each weekday afternoon from 3 pm to 7 pm for your chance to qualify.  When you hear the Cheetah Chase cue-to-call, be caller #99 at 877-437-5995 or by using the CALL US button on the WKDQ app.  Qualifying opportunities will take place once per the aforementioned time frames Tuesday, June 1st through Friday, June 11th, and once per day Monday, June 14th through Thursday, June 17th, during the Q Crew Morning Show with Ryan & Leslie only. WKDQ will qualify 22 listeners for the grand prize event. 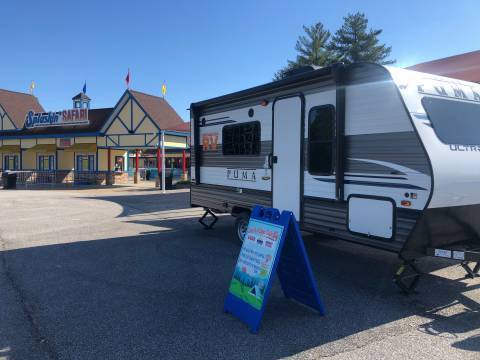 The winner of the contest MUST be a certified qualifier (with valid team members) and must affirm that he/she is not an employee or agent of the Station or any sponsor of the Contest and is not a member of the same household of any such employee or agent. Sponsors of the contest include Holiday World & Splashin’ Safari, Owensboro RV, and Pepsi Co. You must not have won a contest from Holiday World & Splashin’ Safari within the past 12 months.

The winner(s) expressly release the stations, and any sponsors of the contest (Holiday World & Splashin’ Safari, Owensboro RV, and Pepsi Co), and their respective officers, directors, agents, parent companies, subsidiaries, and employees, from any and all claims, demands and/or causes of action of any nature or kind whatsoever, whether presently known or unknown, foreseen or unforeseen, that he/she may have, or may subsequently acquire, as a result of participating in the contest and/or receipt of the prize.

Due to strict weight restrictions on board Cheetah Chase, the MAXIMUM weight allowed inside each boat is 525 pounds. The MINIMUM weight for each boat is 225 pounds.  Any team weighing in above or below those specific set limits will be disqualified.  And, NO teams of two will be allowed to compete.  Each qualifier must be a part of a TEAM OF THREE that meets weight restrictions. Also, each team will be weighed before each race they compete in, so teams will need to plan for additional weight caused by wet clothing, etc.  Due to the nature of the event, a team’s official weight could shift from race to race. No individual shall exceed 340 lbs.

By the way, only ONE qualifier per household is allowed and you may only qualify on ONE participating station.
However, we strongly encourage qualifiers to build their race teams with members of their households.

A TEAM is the official qualifier, plus two more team members.

Qualifiers must be 21-years-old or older.  However, team members for the grand prize event just have to be old enough to clear the height (42” with adult) and weight requirements for the attraction. Team members failing to meet those height and weight restrictions will be disqualified, thereby causing disqualification of the entire team.

Grand Prize Giveaway: On Sunday, August 15th, 2021, all 64 official qualifiers are required to be at Holiday World &  Splashin’ Safari. Registration/check-in for the grand prize giveaway will begin promptly at 9am and will conclude at 9:45am CST.  Listeners qualifying on WBKR will check in with WBKR staff, WDKQ with KDQ staff and MY 105.3 with WJLT staff.  Registration will be held just outside the main gates of the main Holiday World entrance.  At 9:45 am, all qualifiers will make their way (as a group) to Splashin’ Safari and Cheetah Chase for the grand prize event.

Teams will enter the queue line in order of appearance in The Great Cheetah Chase bracket.

The grand prize event, The Great Cheetah Chase, will begin promptly at 10:00 am CST aboard the Cheetah Chase inside Splashin’ Safari.  Participants should be dressed for and ready to ride the Cheetah Chase. Due to time constraints, there will not be time to change clothing.  You must come dressed to compete. You are responsible for your belongings; Locker Rental will not be available prior to the event start time.

At the Cheetah Chase coaster, each qualifier and their team members will compete in an NCAA-inspired tournament bracket of 64 teams.  The event is SINGLE ELIMINATION, with the winner of each race advancing further into the bracket.  Ultimately, the field of 64 will be narrowed to two teams, who will compete in the FINAL “Cheetah Chase” for the grand prize: a Puma camper from Owensboro RV, three season passes to Holiday World & Splashin’ Safari and a year-supply of Mountain Dew.

The winner of each race will be determined by Townsquare Media staff positioned at the official finish line.  In the event of a dead-heat, the two teams involved in that tie will race in a tie-breaking event.

**Qualifers MUST be present to win.  There will be NO team substitutions under any circumstance. The team you arrive with will be the team you compete with for the duration of grand prize execution. Anyone determined to be in violation of this rule will be disqualified from the competition and grand prize consideration.**

In the event a qualifying team is a no show, they will enter the official race bracket as a BYE.  Any team bracketed against a “BYE” team will automatically advance in the bracket.  However, the advancing team will still get the opportunity to participate in that “race” for practice.  They will “compete” (for fun and, more importantly, practice) against a team comprised of radio station personnel.

Positions in the bracket will be determined by draw in advance of the grand prize giveaway.  Though qualifying teams will represent three different radio stations, there’s no guarantee those teams will be separated in the early rounds of competition.  The draw may or may not be posted via radio station web and social media sites in advance of Sunday, August 19th.

In the event of a ride malfunction or inclement weather, there could be significant delays in the execution of the grand prize bracket or complete cancellation and rescheduling of the grand prize event.  If that occurs, the make-up date will be announced to competitors ASAP.  If a mechanical issue or weather delay affects the outcome of a race (or multiple races), those contestants will be asked to contest the race again.  Those decisions are left to Holiday World and Townsquare Media staff and are indisputable and final.

Also, all decisions by Townsquare Media event staff are FINAL and CANNOT BE DISPUTED.

Winners must comply with all of the rules of the Contest, including, but not limited to, any restrictions on age and/or residency, and have not committed any fraud or deception in entering the Contest or claiming the Prize.

The winners must affirm and represent that he/she is not an employee or agent of the Station or any sponsor of the Contest and is not a member of the same household of any such employee or agent.  Sponsors of the contest include Holiday World & Splashin’ Safari, Owensboro RV, and Pepsi Co.

In consideration of the receipt of the Prize, the winners agree to be solely responsible for any and all taxes and/or other fees, including, but not limited to, any federal state or local income taxes, that are or may become payable as a result of participating in the Contest and/or receipt of the Prize.

The winners agree to allow the participating Stations and/or its designees the right to use winners’ names, likeness, portraits, recorded voices, and/or biographical material for an unlimited period of time in order to advertise, promote or publicize the Stations and/or the products and services of any of its designees.

The Stations are not the manufacturers or distributors of the Prize. With respect to any claims that the winners may now have, or that he/she may subsequently acquire as a result of the possession and/or use of the Prize, the winners acknowledge and agree that he/she shall look solely to others in the chain of production and distribution of the Prize to the exclusion of the Station and any sponsors of the Contest.

The station makes no warranties of any kind with respect to the prize, including, but not limited to, any warranties of merchantability or fitness for a particular purpose. Station hereby expressly disclaims any and all such warranties.

The winners expressly release the stations, and any sponsors of the contest (Holiday World & Splashin’ Safari, Owensboro RV, and Pepsi Co), and their respective officers, directors, agents, parent companies, subsidiaries, and employees, from any and all claims, demands, and/or causes of action of any nature or kind whatsoever, whether presently known or unknown, foreseen or unforeseen, that he/she may have, or may subsequently acquire, as a result of participating in the contest and/or receipt of the prize.

No purchase is necessary to participate in or win Townsquare Media contests. Contests are void where prohibited by law.

Employees of Townsquare Media, Inc., their affiliates, subsidiaries, advertising and promotion agencies, vendors, and their immediate family members and/or those living in the same household of each are not eligible.

Listeners are only eligible to win every 30 days.