Where did our fountain go?

Home // HoliBlog // Where did our fountain go?

Long, long ago … before the town of Santa Claus was even named … a giant meteor crashed into one of the town’s hillsides, leaving behind a huge crater for folks from miles around to come and see.

A shooting star came to rest in this town. And it happened on Christmas Eve. What does this mean? A holiday miracle perhaps?

The reason I present this as fact and not legend is because I know it’s true.

In fact, he knew the guy who dug the crater

I thought of this story the other day when another Christmas Crater appeared in town. 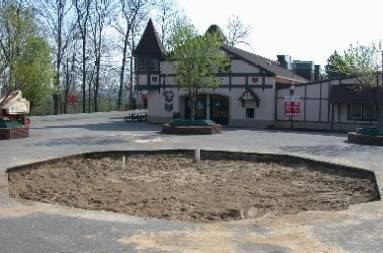 No it’s not a sinkhole. It’s the remains of the Christmas Fountain.

Here one day. Gone the next.

All that remains now is a big hole in the concrete. Sigh!

In late 2003, we were named as one of the three finalists for the highly coveted Applause Award.

Normally, I wouldn’t use a word like “coveted.” Sounds trite, and a bit sinful.

But let there be no misunderstanding, our Will Koch coveted the Applause Award!

To be a finalist for this international award the first time we were nominated was a coup in itself. It suddenly hit us that we had a chance to win this thing. And we’d be the smallest park ever to win.

“If we win,” Will pledged in staff meeting, “we’re putting those hands in the fountain.” We all chuckled.

The Applause Award is a work of art. It’s a pair of hands, applauding. Will talked about having a large version made and added to the fountain.

After hosting the international Board of Governors for the Applause Awards last summer we knew we had a shot. So did the other two parks, both magnificent European parks. 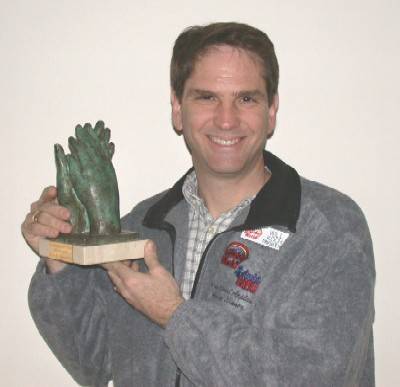 Not long after, Will distributed our Capital Improvement Budget for 2005.

As I scanned the long list of line items, I blurted out:

“Oh! You really meant it about the fountain!”

All those months, I’d thought Will was joking (he jokes a lot; he’s a jovial guy).

Yes, he really meant it. We’re getting a new fountain. Same size, but with a bunch of bubblers, jumping jets, and colored lights. And, rising proudly from the center of the waters, a pair of applauding hands, eight feet tall.

The giant hands are being hand-crafted for us, so it may be a while before they’re ready. Meanwhile, bronze plaques will be installed along the perimeter, naming the other parks that have won this coveted award in the past. It’s our way of starting a hearty round of applause for all the people who developed, worked at, and visited these parks over the years.

Bravo!
___
Would you like to receive HoliBlog notices – along with news releases and sweepstakes – by email? Sign up here and you can choose whether to receive the emails weekly or the same day the blog posts are published. Thank you!