Wow! Will Koch is getting into this HoliBlogging — two days in a row! (He cautioned me not to expect something every day. We’ll take what we can get, right?)

This is from Will:

Yesterday, our marketing director, John, called and said we needed to talk about the logo design for the water tower. We had planned to put the Holiday World logo on it in its usual “stacked format.” 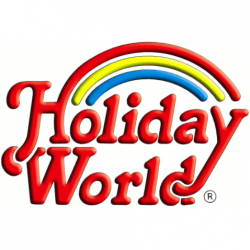 It would be about 32’ wide by 25’ high. A nice size that would probably be visible a few miles away. The painting contractors had the art, and should have started painting the logo several days ago, but there wasn’t a logo there yet, so I knew something was up.

The problem, apparently, was that because of the logo’s height, it was wrapping too far up and down the sides of the tank. Because of the decreasing radius of the tank as you go up or down from the “equator,” this would cause too much distortion.

It wasn’t going to work

So, John and I had to sort out the problem. The question was, how much does the curvature affect the art?

How big can we go without really messing up the Holiday World logo?

Fortunately, I had something in my office that worked out as a stand-in for the water tank. It was the “Official Zinga Test Ball,” a basketball used by Andreas Tanzer of ProSlide to test the Zinga before we put water, inner tubes, and people on it.

According to Andreas, a basketball on a dry slide is a pretty good stand-in for an inner-tube-on-a-wet-slide. Anyway, the Zinga Test Ball became the stand-in for something else—-the bowl on our new 500,000-gallon water tower. 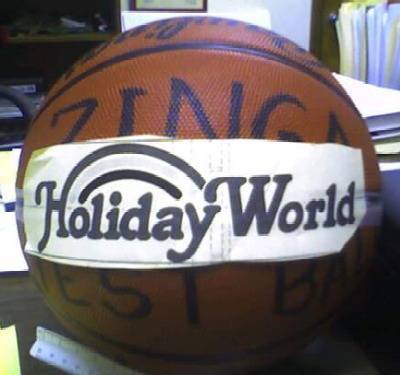 As you can see, we decided that the “horizontal” logo would look the best. We even used the basketball to determine exactly how long the logo could be and still be read without too much distortion. Indiana is famous for basketball, but who knew how clever we Hoosiers could be about finding new and creative uses for them?

Anyway, the water tower problem was solved, and the Zinga Test Ball has a new look for a while.