Update: In case you found this blog post (from 2005) in your quest to discover which time zone Holiday World is on, we’ll make it simple: Central Daylight Time. We realize most of Indiana is on Eastern, but our little corner of the state is on Central.
—–
Last night, the Indiana State Legislature made a timely decision.

Next April, the entire State by law will “spring forward.”

Now maybe David Letterman and Jay Leno won’t make quite as much fun of the Hoosier State. And the national news anchors won’t have to make a big deal every spring and fall when they announce, “Every state in the Union … except for Indiana, Hawaii and Arizona … will change their clocks tonight.”

If you’re not from around here, you probably don’t know this, but even when we’re on the same time, we’re on different time.

When you visit Holiday World this summer from, say, Indianapolis, you may decide to check ahead about time zones. You might check on our website. Hmmm. Indy is on EST (Eastern Standard Time) and the town of Santa Claus is on CDT (Central Daylight Time).

So … do you leave a little earlier or a little later?

Welcome to my world

All that may change in 2006. In April next year, the entire State will “spring forward.” But, unless there’s a federal decision to move the time-zone lines, most of Indiana will be on EDT but five counties in southwestern Indiana will be on CDT. And then you’ll definitely need to change your watch when you come to visit from Indy.

An Evansville news staffer thought it would be fun to talk to us about the potential for confusion.

Will talked about the importance of “One State, One Time.” (The man’s a walking slogan maker.) 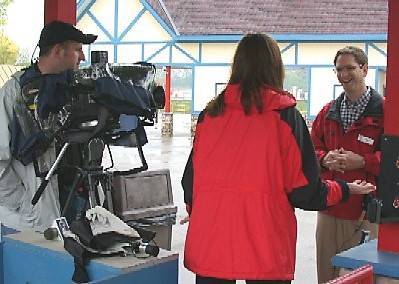 He explained that looking at a time-zone map, it appears that Indiana should be on Central. But the Indianapolis area is on Eastern. In his opinion, it’s more important for us all to be on the same time than for our five counties to remain on Central.

Then the reporter asked to speak with someone who lives on one time and works on the other during the winter months. I’d already roamed the hallways hitting up Tori, Vanessa, Rachel, and Sabrina (who would have done it, but she just got a perm). Matt is apparently still celebrating Tax Day and was unavailable for comment.

Everyone was really, really sorry … but just didn’t feel comfortable being interviewed for TV. So the pinch-hitter was forced to step in. I live an eight-minute drive from work –  but in another time zone. So from October till April, it takes me 68 minutes to get home in the evening (even when the roads are clear). And in the morning, I manage to go back in time and arrive at my desk 52 minutes before I left home. (Believe me, the science-fiction/time-machine geeky excitement wears off pretty quickly. Then it just gets annoying. And no, I don’t suddenly look down and realize I’m still in my jammies.)

So, gentle readers, don’t worry about time zones this season. If you were on-time last season, you’ll be on-time this season. (Of course, if you were an hour early last year and I waved at you in the parking lot at 8:00 am CT, you might want to linger over that last cup of coffee a bit longer.)

If the Federal government decides to move the time-zone lines, I’ll be sure to let you know. And if they don’t, I imagine I’ll be back again a year from now, whining about time.

And you can set your watch to that!