Just pulled into my parking space and saw, off in the woods, The Raven flying by. It’s roller-coaster testing time.

The train is empty, of course.

But still, what a glorious sight! And the click-click-click sound as the train ascends the lift hill is music to my ears!

We’re adding a second train to The Raven this season. I’m not sure if it’s here yet, but I’ll find out and will let you know.

With the addition of the second train, all sorts of safety contraptions have been added. That’s what they’re deep into roller-coaster testing. In a nutshell, there will always be a set of brakes between the trains. It’s a good system.

We had quite a discussion regarding whether the second train should be “Raven Red” or a different color.

I’ll wait to tell you until I can show you the new train. 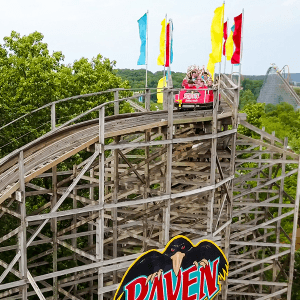 Last summer, we got a call from a travel writer with the St. Louis Post-Dispatch. Tom and I had been in touch for several years and it was great to know he planned to drive the three hours to visit us.

Tom was particularly fun to walk with around the park. He was fascinated by Zinga and took lots of photos of those clover-leaf inner tubes plunging into the enormous pink and blue funnel.

When it came time to look at our coasters, I offered him a ride.

“I’ll ride them as long as you hold my hand”

Will Koch was with us and we had a good yuck. Will knows what a coward I am and that I’d be no comfort whatsoever to someone who was a bit nervous about riding a top-ranked coaster.

We decided to ride The Raven first, since it’s not as long or fast as The Legend. Tom deferred to me for advice when I asked where to sit. I like the front, because you get the best view. The back, though, provides the wildest ride. The back seat it was. 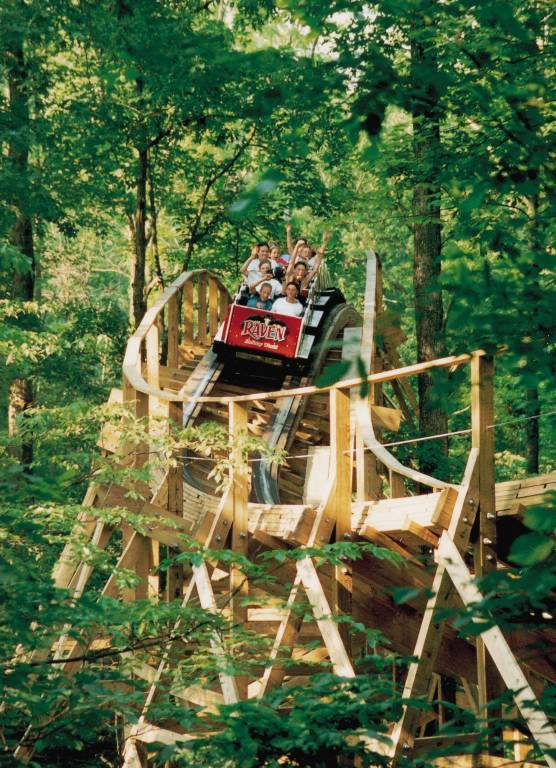 As previously mentioned, I’m a chicken and a screamer. Doesn’t matter how many times I’ve ridden, I still render my riding partner temporarily hard of hearing. It’s downright humiliating.

Tom and I hooted and hollered over the hills of The Raven. He grinned as he wiped a few drops of sweat (or were they tears?) away. And we headed down the hill to The Legend. He talked me into grabbing another backseat ride. We screamed ourselves hoarse.

As we lurched into the brake run at the end of the ride, two teenage girls (with fabulous long, blond “coaster hair”—sorry I caught my hand in it, dear) sitting in front of us were still squealing.

One shouted to the other, “That was awful – let’s ride it again!”

Late last summer, the Post-Dispatch ran Tom’s inviting travel article about his trip to southern Indiana. And in case you’re wondering, he never did hold my hand.
___
Would you like to receive HoliBlog notices – along with news releases and sweepstakes – by email? Sign up here and you can choose whether to receive the emails weekly or the same day the blog posts are published. Thank you! 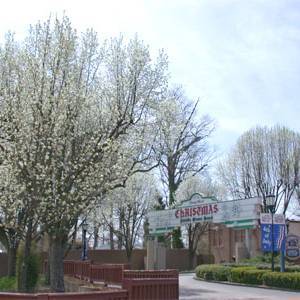 It’s a shame we’re not open this month.

Now that’s a dangerous statement to make 29 days before opening. Everyone is focused on getting rides ready to go, employees trained, new stuff publicized and advertised. Lots of painting and cleaning to do. Time is of the essence.

Nerves can get frazzled. 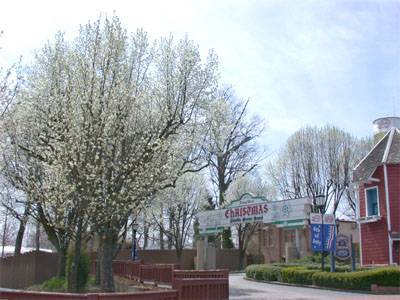 In April, the Bradford Pear trees are in bloom in the park. The dogwoods aren’t out yet, nor are the redbuds. The first sign that spring is really here is those pretty trees. (Thus ends my knowledge of trees. I think I could recognize a maple leaf and the bark off a birch tree, but that’s it. Heaven help me if we ever decide to open an Arbor Day section!)

All it will take is one blustery storm and the lovely white blossoms will swirl to the ground. Our last snow storm before opening. And blossoms don’t conveniently melt as snow does. It’s one more clean-up process.

Every spring, I think how it’s a shame our Guests don’t get to see our lovely Bradford Pear trees.

So here’s a look.

Springtime is in the air today … and our last snowfall is not far away.
___
Would you like to receive HoliBlog notices – along with news releases and sweepstakes – by email? Sign up here and you can choose whether to receive the emails weekly or the same day the blog posts are published. Thank you!

Wow. It’s not just my Mom reading this thing.

An email came in late yesterday afternoon from a lady asking about discounts. When I emailed her back with the information, she replied with this sweet story (I have her permission to post this and use her name):

I remember my Aunt Deanie (who had come home from California for a couple of weeks with her kids) reading about the “new park called Santa Claus Land.” She piled all of us kids in the car (she must have been crazy!) and we headed all the way down there. Long drive then, but less traffic, too.

So, I was 8 years old and we were there one of the first years it opened. I almost cried when I saw on your website showing the very first sign! I ran the video and I swear I saw myself, but everybody back then had ponytails and white blouses. Ha!

I would love to see some more old pix!!

Here’s a look at the video from our Santa Claus Land days: 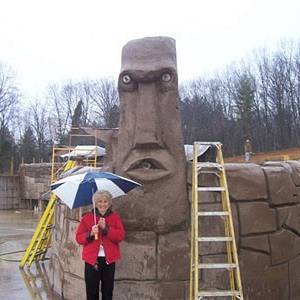 A lot of children (and some adults) think working at a theme park is the coolest job imaginable. Yes, making families happy for a living is an amazing career.

Permit me, however, to clear up a few possible misconceptions:

One of the many things we do get (inherit, really) is a vast wealth of family tradition and small-park culture. We have an exciting future, certainly, but also a rich past.

When we host a travel writer or similar VIP, we typically stroll together through the park. It’s not just to point out this coaster and that theater; it’s to provide “color commentary” on the 100 acres that have hosted millions of smiles and laughs over the past 59 years.

The stories range from a teasing tale about Will Koch’s childhood “job” as an elf to the history of how we went from being Santa Claus Land to Holiday World.

If Mrs. Koch joins us, she’ll laugh as she tells about the man who stopped her in the Christmas section a few seasons back and asked her, “Are you that woman in the commercials?”

Here she is, by the way, looking quite youthful with one of the Tiki faces for Bahari, our new themed wave pool. 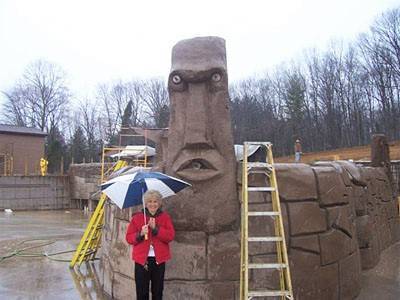 The stories are different with each walk in the park. They seem to fascinate the writers and other V.I.P.s, and yet few, if any, of the stories end up in a news release.

That’s why we’re starting HoliBlog: A Walk in the Park

Maybe we’ll hint about upcoming expansion projects. And once those new projects are under construction, we’ll show you photos and will let you know what’s going on.

And who is the actual blogger? Ideally, we’ll make this a group effort, with stories from all departments. But for the most part, these entries will be penned (can you even say “penned” anymore?) by PR Director Paula Werne.

Meanwhile, it’s April 7. We open for our 59th season on May 7. You do the math!
___
Would you like to receive HoliBlog notices – along with news releases and sweepstakes – by email? Sign up here and you can choose whether to receive the emails weekly or the same day the blog posts are published. Thank you!