The Lifeguard crews aren’t the only ones having fun after-hours.

The Games crews recently got together for a friendly little competition: 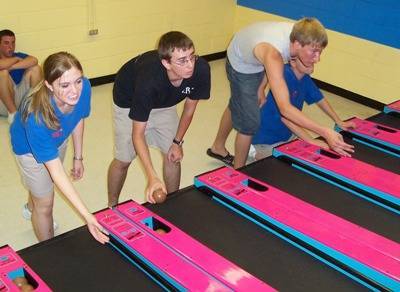 According to April, their Director:

The eight teams were paired up and they each got to play three games of Skeeball in the first round, with the winner advancing to the “Final Four.” Five games were played in the “Final Four” and then the championship game consisted of seven games each from our final two teams. The scores were tallied by the number of tickets won by each team.

Everyone had a blast – some coming up with cheers and chants, dressing up, and then some serious competing.

The final game came down to the “4 Hot Mamas and their Sugar Daddy” team and the “Sign Up w/Me” team.

Here is the Mamas/Daddy team in all their finery: 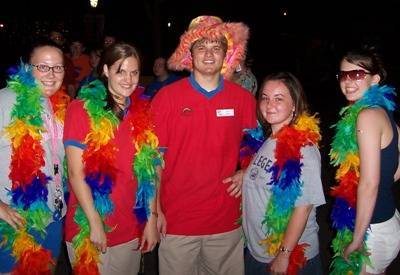 Those who are still in uniform have made the traditional “I’m off the clock” fashion statement by untucking their shirts.

Back to April’s report: We didn’t let anyone know the score of the final round until the last game – this, of course, was driving everyone crazy. In the end, Sign Up w/Me pulled out an upset over the heavily favored 4 Hot Mamas and their Sugar Daddy with a final score of 292 to 261.

It was a fun couple of nights and everyone enjoyed the friendly competition – so much so they are asking when the next tournament will be.

Here’s the “Sign Up w/Me” team after their win with the “Bob the Rock” trophy. 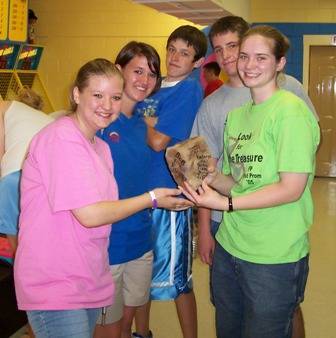 Yes, of course. Bob the Rock.

It seems Bob the Rock once took up residence in Tori’s office.

It’s not a large office, and Tori decided one day it was time to downsize her … um … decor.

Although surely some items were permanently removed from the office building, Bob the Rock simply moved across the hall.

A few minutes ago, April told me that when she realized she needed a trophy, she looked around her office. Bob the Rock seemed to be the natural choice.

Yes, of course. Why have all that cool, colorful plush from your office serve as a trophy?

Not when Bob the Rock is available.

I never thought to keep a rock in my office, much less to name it.

Must be a generational thing.
___
Would you like to receive HoliBlog notices – along with news releases and sweepstakes – by email? Sign up here and you can choose whether to receive the emails weekly or the same day the blog posts are published. Thank you!