… knowing, but not telling.

A burden, I tells ya!

Our ’06 announcement will be made in the coming weeks (I’ll let you know the date as soon as I have it) and some folks are getting antsy.

One fellow got so testy with me the other day, I was tempted to ask if it was “finals week.”

That probably would not have helped.

It’s time to set the record straight regarding the budget for the expansion project.

Now this isn’t the final number, but a working figure.

Someone once asked her if her heart pounded the day she rode The Raven.

“Not nearly as hard as when I signed the note with the bank.”

And that was a decade ago. The Raven cost $2 million.

Please check back in a week for the answer to the following question:

Is the expansion for Holiday World?

Or both?
___
Would you like to receive HoliBlog notices – along with news releases and sweepstakes – by email? Sign up here and you can choose whether to receive the emails weekly or the same day the blog posts are published. Thank you! 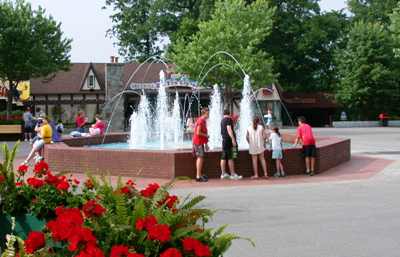 The Applause Fountain is nearly complete!

And by golly, it works!

I got a particular charge out of what I assumed was a brother/sister act. At first, it looked like they were waving at the water.

Actually, the brother taught the sister to, Jedi-like, raise her arm to make the fountain waters rise. And then lower her hand to let the water rest for a bit.

Housekeeping note: This is not a hot tub. Please don’t soak your feet.

Last year, I couldn’t convince a young lady to remove her tootsies from the old fountain.

Until I told her it would make her feet turn green.
___
Would you like to receive HoliBlog notices – along with news releases and sweepstakes – by email? Sign up here and you can choose whether to receive the emails weekly or the same day the blog posts are published. Thank you!

It’s so frustrating when a supplier is late.

But sometimes it happens and there’s nothing you can do about it.

Except to maybe whine a little.

Until the lights arrive and are installed, the well is dry. 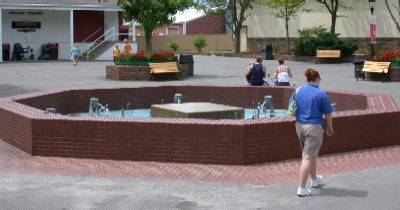 Dry as a bone.

Dry as a … wishbone?

They approach it with a curious look on their faces, glance in, look around, comment to one another about the town’s water supply, and then move on.

One person wondered aloud if somehow the new water tower had somehow caused the “shortage.”

For some, old habits die hard: 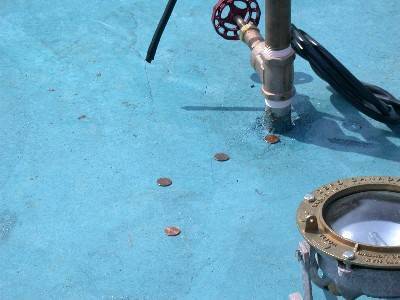 Maybe they’re wishing … for the new fountain to be finished?

(Note to self: Watch Will carefully the next time he walks by the fountain; he’s always jingling coins in his pockets.)
___
Would you like to receive HoliBlog notices – along with news releases and sweepstakes – by email? Sign up here and you can choose whether to receive the emails weekly or the same day the blog posts are published. Thank you!