I remember back when The Raven was under construction. It was during the fall and winter of 1994-95. We took a magazine writer on a construction tour and some coaster enthusiasts came along (for color commentary, so I learned).

I must admit to initially thinking those people were nuts.

By just looking at the positioning of the footers and the beginnings of the structure, they already knew what kind of ride we were all in for the next spring.

“Look at that!” one cried out, pointing down into the woods. “The G-forces there will be incredible!” Another gasped: “Laterals!” (I caught him wiping away a bit of drool and quickly looked the other way.)

What were we getting ourselves into?

Happily, those folks gradually grew on us. Many of them really do know a lot about coasters–the history, the engineering, the physics. And their gushing (minus the escaping saliva) really is contagious.

Over the years, I have been asked repeatedly if I’m a coaster enthusiast. My response has always been the same: I’m really more of an “enthusiast enthusiast.”

Does that make sense?

I really get a kick out of these folks. (Well, most of them, anyway.) They have endless questions, boundless enthusiasm, and countless recommendations.

Most of their conversations with us start with the following: “Do you know what would be really cool?”

The first “special event” we hosted for enthusiasts was held on May 19, 1995. (I remember the date simply because it was my birthday. How old was I? A decade younger than now; let’s leave it at that, shall we?) 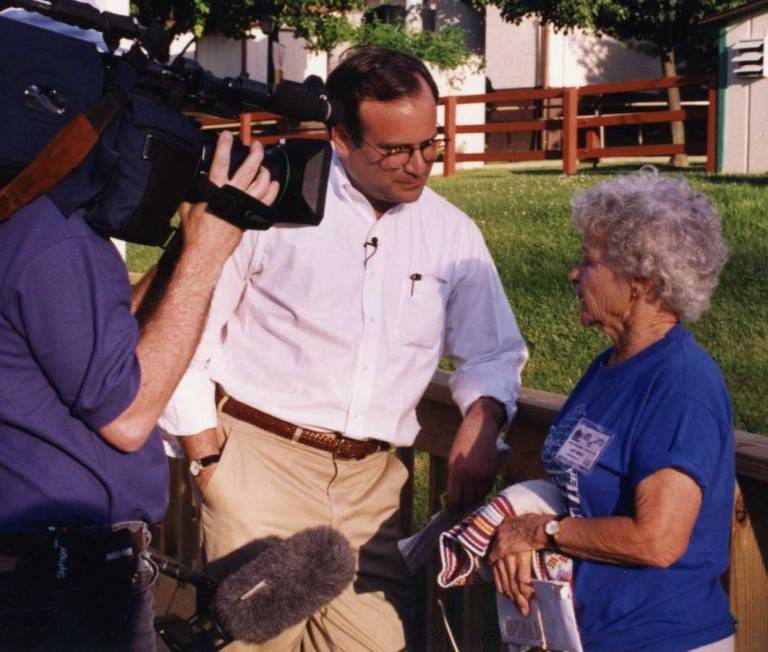 The event was coordinated by the folks with the American Coaster Enthusiasts (ACE) and included a little gift for me: Richard Schlesinger and a crew from 48 Hours. The CBS show was focusing on thrill seekers (that’s Lucy from Florida being interviewed in the photo), and they found more than a few riding The Raven that day.

My favorite moment was taking Mr. Schlesinger for a walk out in the woods so he could see The Raven’s wild layout close up. (We never did get him to ride it.) Mrs. Koch was back in the station, helping the ride ops dispatch trainload after trainload of deliriously happy ACEers. She was on the microphone, joking around with them. We could hear her jovial banter through the trees.

I could tell he was listening

So I hushed up.

Our esteemed network reporter, who had finally loosened his tie and was now even carrying his tailored suit jacket, at long last cracked a smile and murmured, almost to himself: “This is fun.”

YES, Richard, yes! It’s FUN! You get it! (Don’t worry; I was still in “hush” mode at this point. Didn’t yell at the nice reporter.) 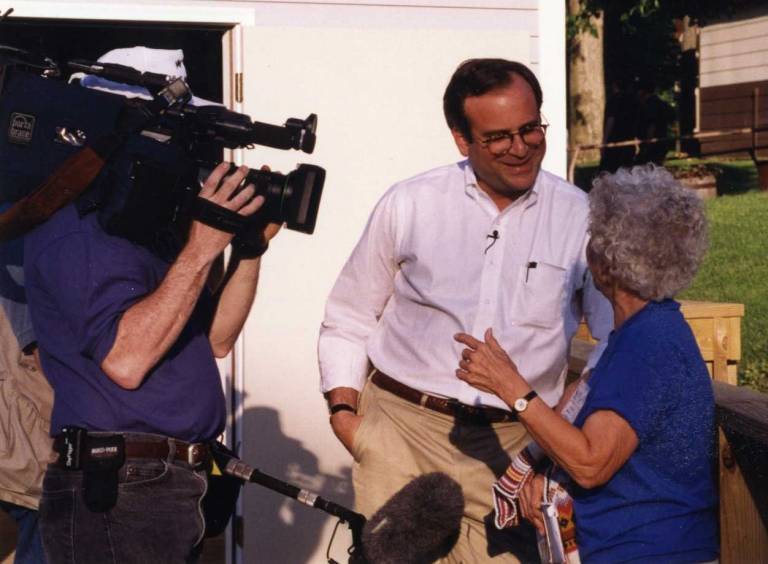 The 48 Hours segment didn’t air until that August. In fact, it almost didn’t air at all. As I recall there was a dreadful hurricane that threatened the Eastern Seaboard that week.

We were nearly pre-empted. But it did air on CBS. And then made its way over to cable. I caught it on The Learning Channel a few times. Just thrilling!

Ever since that first event for enthusiasts, we’ve looked forward to their happy gatherings. There’s one coming up in June, actually. If you think you might be an enthusiast, you’ll want to consider signing up for our HoliWood Nights special event.

Because, if you’ve made it to the end of this tome … you just might be an enthusiast.
___
Would you like to receive HoliBlog notices – along with news releases and sweepstakes – by email? Sign up here and you can choose whether to receive the emails weekly or the same day the blog posts are published. Thank you!

4 Responses to “CBS correspondent discovers ‘fun’ at The Raven”