My youngest child spent his final four in utero months riding around Holiday World & Splashin’ Safari as Mommy took reporters and travel writers on tours of the parks.

When my ob/gyn figured out how significant a baby was on the way, he offered to speed things up a bit. Sweet Baby James was 12 days early when he was born on August 12, 1999, yet still weighed in at a respectable 9 lbs. 13 oz.

He was already making plans: 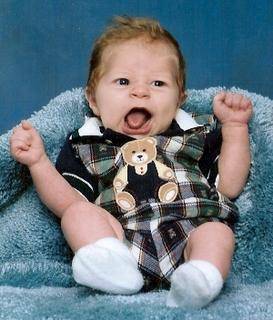 Several of the coaster club publication editors asked for a photo of the Raven Maven’s new baby (yes, that’s what they call me), and this one was an instant hit.

… and the mandatory quick-before-school-starts-up doctor’s check-up.

When James hopped up on the scale and then had his height measured, we forever crossed over into a new era.

I’ve worked here long enough that instead of my mind converting 48″ to “four feet,” my immediate thought was:

He can ride the coasters now

Dr. Kreilein just happened to be walking down the hall and saw my stunned look. “Hey, James — you’re tall enough to ride The Raven and The Legend! Way to go!”

Dr. Kreilein has two boys of her own. And season passes. She understands. It’s a bit surreal to have your pediatrician look up after listening to your child’s heartbeat and ask, “So how’s The Voyage coming along?”

James’s heartbeat was probably a bit elevated. He’s been wanting to get on those coasters for years.

When will I be old enough?

Saturday was the day.

Gary and I cautioned James ahead of time that he had to measure 48″ tall in the park, just in case there was a slight discrepancy.

Saturday afternoon, yours truly got to work on the Golden Ticket Awards news release.

Daddy and James had coasters to ride.

He likes the front seat. He likes the back seat. No complaints about the middle seats either.

He can’t get enough.

“James, let’s go ride some other rides,” suggested my husband.

Good gravy. I’d given birth to one of them.

My baby is an enthusiast!

Upon arriving home that evening, James dragged out his tub-o-K’nex and went right to work on… 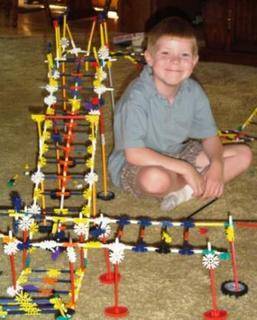 If you look closely you can see he even included the “dogs” going up the lift hill (they make the “click, click, click” sound) and the flags.

James and The Raven have taken over our living room. Yesterday I got up off our couch and obliterated the queue!

My red-haired son isn’t completely single-minded though; he occasionally takes a break to head back to the computer alcove to watch the coasters’ streaming video.

Mom, what color will The Voyage’s flags be?

My youngest found a way to express his true feelings to me the other evening. Adding his own twist to a quote from his favorite Spider-Man movie, James solemnly announced:

“With great coasters comes great responsibility.”
___
Would you like to receive HoliBlog notices – along with news releases and sweepstakes – by email? Sign up here and you can choose whether to receive the emails weekly or the same day the blog posts are published. Thank you!