Spending all of Friday with the crew from National Geographic Channel was great fun.

Incredibly hot, though. It was around 90 degrees and quite humid.

Poor Quinn, the associate producer. She’d packed clothes based on normal late-September Midwestern temperatures. (Most of the crew hailed from California.)

I took a bunch of photos and will put those up on another post within a few days.

First, I want to tell you about Saturday.

We had a second TV crew scheduled for an all-day shoot. This was a location-scouting expedition, so we won’t mention the name of the satellite/cable network until we know for sure that it’s a “go.”

We started out walking through the park with Will and Chad, down to the Voyage construction site.

The producer … I’ll call her, um, Liz … asked me to tell her more about coaster enthusiasts.

I regaled her with a few stories and she asked if there was any way she could meet one of these interesting creatures.

As a matter of fact, there’s a fellow here in town who moved his family to Santa Claus so he could live close to the park.

In her delightful British-accented voice she asked, “Could we possibly pop by his house? We’ve got to meet him!”

I quickly offered to call Paul and invite him to join us on the construction-site tour.

As much as I knew Paul would be thrilled to be included in the construction tour, my primary purpose was to stay on his wife’s good side.

Carrie would have my head on a platter if she knew I’d facilitated an unscheduled “pop in” to her flat. (It’s hard not to pick up that English way of talking.)

And I wouldn’t blame Carrie a bit either. We both have Kindergarteners who tend to take over our houses with their many projects. Wouldn’t have it any other way, but it’s not exactly the showcase-environment you’d like to show a TV camera.

Will et al cracked up at how quickly Paul scurried over here.

Heart pounding (or so he told me).

My heart was pounding, too, by the time we got to the place on the Snowy White Gravel Road from which you can see where the turnaround portion of our new coaster will be.

Contrary to most out-and-back layouts, we’re actually going uphill in the first half of this 1.2-mile layout.

So instead of giving Mr. Physics the opportunity to gain speed using the topography along the way, we’re requiring a 100-foot climb in the “out” part of the ride.

And it gets really steep there near the end.

After the tour, I coyly suggested that Paul probably needed to head home.

Why don’t we just pop in to see your family this evening?

The terror in Paul’s eyes was worth the price of admission.

“Um…well…I’d have to check with my wife. I have a feeling she wouldn’t be quite ready for company.”

I noticed he walked out of earshot to call poor Carrie.

In a moment, he was back: “Hey! Great news! I can stay here longer. So you can just interview me here!”

Ah, the power we wives wield

We climbed another hill so that Liz could interview Paul. This time, it was right next to the lift hill at The Legend.

Somehow, without my reading glasses, I was able to figure out Paul’s camera and snap off a few. 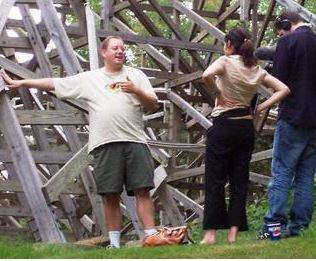 While the interview went on and on (Paul has many opinions, ideas and recollections), I retreated back down the hill.

Families floating by on Frightful Falls started waving at me, so we amused each other with that for a while.

And then it was really time for Paul to head home.

By the next day, he’d already posted page upon page of photos on his website, Negative-G.com. Here’s the direct link to his report.

I first got to know Paul early in 2000 when we were getting ready to premiere The Legend.

And Carrie was getting ready to give birth to their son.

The “due dates” were alarmingly close.

Paul’s determination to be present for both births (he lived three hours away from the park at that time) gave me a new understanding for “coaster crazy.”

Somehow, he worked it all out.

Celebrated the birth of his son.

Rode on one of the first trains out of The Legend.

Moved his family to Santa Claus.

If Liz ends up doing an hour-long documentary about Paul, I guess I’ll understand.
___
Would you like to receive HoliBlog notices – along with news releases and sweepstakes – by email? Sign up here and you can choose whether to receive the emails weekly or the same day the blog posts are published. Thank you!