Home // HoliBlog // Podcasting with Will

We had a grand time hosting the folks from CoasterBuzz.com last weekend.

One of the “extras” on Saturday was the opportunity to sit in on that week’s podcast recording, which we held in our Holiday Theater.

They asked Will Koch to be their special guest (that’s him on the left). He was only too happy to talk about The Voyage. 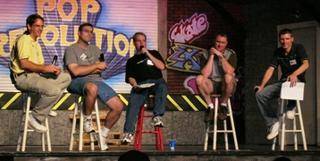 To listen in, head over here.

There was one awkward moment, we must confess. Right before the CoasterBuzz podcast commenced, we announced to the audience what we were up to. We told them the “Pop Revolution” show that was usually performed in the theater was closed for the season.

Half of the audience got up and left.