Keep a lid on it

Let’s get something straight: The “lid” for Tunnel #1 in no way resembles Tupperware.

And the tunnels are nothing like those on The Raven and The Legend.

Because the tunnels at The Voyage are underground.

Cedar worked for the wooden tunnels at The Legend (and offered a lovely whiff of relaxing aromatherapy). But for the underground tunnels at The Voyage there’s a need to use a material that termites won’t be able to nibble. 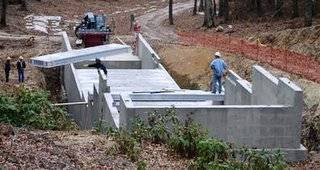 Concrete. And lots of it.

One piece at a time (each piece weighs something like three tons), the pre-poured concrete slabs are being carefully lowered into place. 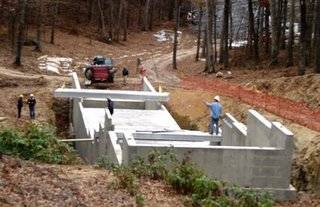 Take a look at the upper right portion of the above photo. You’ll see some Voyage structure through the trees. See where we are? That structure is part of the second hill. Hill #3 has yet to be built; at the bottom of the hill, we’ll fly into Tunnel #1.

And will the internal temperature be cooler than outside in the summer, as caves are?

Rachel took this photo from the other side of the tunnel. 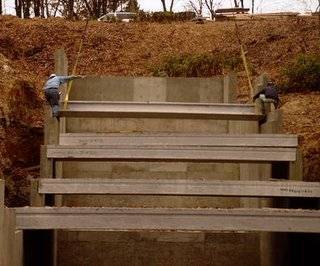 Here it is from a bit farther away.

After all the pieces are in place, a final layer of concrete will be poured. The lid.

And then it all gets buried in dirt. (That’s the “underground” part of all this.) 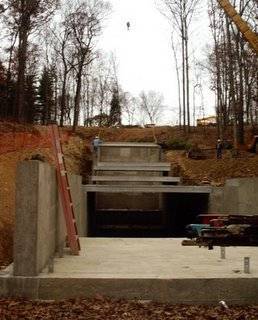 And regarding the added element mentioned a few weeks back, we’ll let you know more early next week. Will is going to be on another podcast with CoasterBuzz and will spill the beans then.

But for now, we’ll keep a lid on it.
___
Would you like to receive HoliBlog notices – along with news releases and sweepstakes – by email? Sign up here and you can choose whether to receive the emails weekly or the same day the blog posts are published. Thank you!