Okay, so it’s not midnight blue, but close enough. 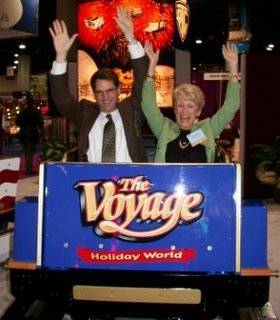 Will, his mom, and three of our directors were in Atlanta last week, attending the annual IAAPA Convention.

The folks at PTC had a display model, which garnered a lot of attention. 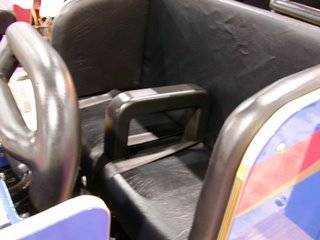 Remember, The Voyage will have three trains when it opens May 6. And each train will have seven cars (the trains on The Raven and The Legend all have six cars).

Here’s a side view: 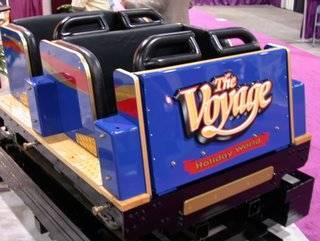 The IAAPA Convention is huge (IAAPA stands for the International Association of Amusement Parks and Attractions). There are loads of social events, seminars, workshops, plus a gigantic exhibition.

Look who Will and Mrs. Koch found … 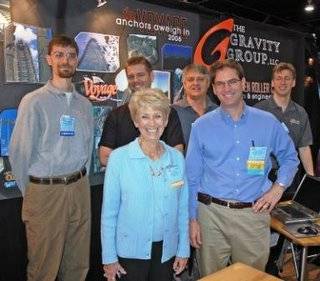 It’s our friends from The Gravity Group.

From the left in the back row, that’s Korey, then Chad (affectionately named Chadwick by the Discovery Channel crew last month), Larry, and Mike.

This photo was taken by Justin, the head of the European Coaster Club. He’d emailed me from Atlanta to tell me he’d seen Will and Mrs. Koch in the exhibition hall. I emailed back in my standard professional manner that it was good to hear they weren’t goofing around.

By the way, that additional element that has been added to The Voyage is a third 90-degree-banked curve.

Sort of a big “swoosh”

The third 90-degree-banked curve is the one closer to the end of the ride.

Heading out soon for Thanksgiving with family and friends? We wish you all a warm, wonderful, and safe holiday!
___
Would you like to receive HoliBlog notices – along with news releases and sweepstakes – by email? Sign up here and you can choose whether to receive the emails weekly or the same day the blog posts are published. Thank you!