One just never knows when one might meet one of Santa’s Helpers. At the Vigo County School Corporation, there is a Hoosier Prairie fifth grader who will think twice before he starts to spread unfounded rumors about Santa Claus. He’ll probably think once more before believing his own story … now that he has the facts. 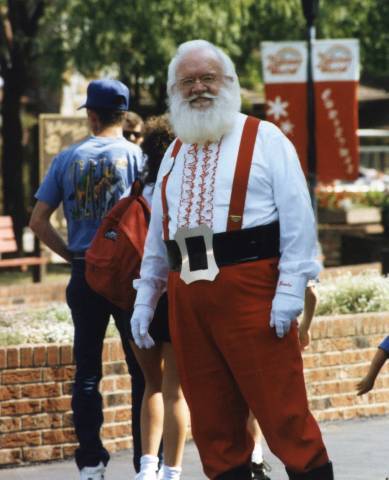 The older student decided it was time to tell a first grader at the school’s after-hours program. Well, he was going to tell him that there is no Santa Claus.

That was indeed his plan, but a supervisor at the after-school program interceded. She warned him to be careful about the “knowledge” he was about to share.

While everyone may believe as they choose, Julie Anderson explained to students that she not only believed in Santa — she actually worked with Santa Claus!

Anderson spent her last nine summers at Holiday World, earning money for college and was well prepared for the questions that followed. After all, one summer she personally escorted Santa out in the park.

So exactly how did she know he was Santa Claus?

What proof did she have?

That name is also featured on his checkbook and his credit cards.

So believe as you will, but don’t be surprised if Santa has picked up another believer at the Hoosier Prairie Elementary School.

You might notice the supervisor in the story has the same last name as the news director. Julie is indeed Jim’s daughter.

And there’s no doubt that she will forever be listed in Santa’s “Good Girls” book.
___
Would you like to receive HoliBlog notices – along with news releases and sweepstakes – by email? Sign up here and you can choose whether to receive the emails weekly or the same day the blog posts are published. Thank you!

One Response to “You’d better watch out!”