Home // HoliBlog // When your 6-year-old emails your boss

When your 6-year-old emails your boss

He’s only six. He’s in Kindergarten.

You may recall he is one of those “Coaster Crazies.” He can’t get enough.

Remember Ralphie from A Christmas Story? And how when he’s describing the Red Ryder BB gun he wants for Christmas, it’s all one word?

James is the same way when he talks about The Voyage. To anyone who will listen, he announces:

The latest thing in Kindergarten is “stretching.” The children are taught that sounding out words and spelling them phonetically is the way to go.

They’ll worry about spelling some other year.

I was skeptical at first. (Actually, the word horrified is far more appropriate.)

But I’m beginning to see the light

According to the experts, too much emphasis on spelling tends to block the tots’ creativity glands. They get so worried about i-before-e that they just don’t bother.

The lad is quite independent. He wants to do it all by himself.

So after a bit of tutoring, he now opens the computer program, double-clicks on the appropriate name, taps out a message, and clicks “Send.”

My folks in Connecticut hear from him almost daily. Other recipients are scattered throughout nearly a dozen states.

I’d forgotten Will, my boss, was in my email address book at home. James discovered it over the weekend.

“Mom, I wrote an email to Will”

You didn’t send it yet, did you?

I held my breath as I clicked on the “Sent” folder. Stretching, after all, can lead to words that don’t always mean what you intended.

Here’s what James wrote to my boss, word for stretched word:

What a relief he was able to help Will avoid any confusion by describing which James Werne he is!

I wasn’t really all that worried, as Will has three children of his own, and is genuinely a nice guy.

So nice, in fact, that he replied the very next day:

James, I really like roller coasters. I love to ride them, but I really
love to work with designers/engineers to create new ones. Like a lot of
people, I can’t wait to ride The Voyage!

Speaking of stretching, here’s a look at James stretching out on a hillside with The Voyage rising up behind him. 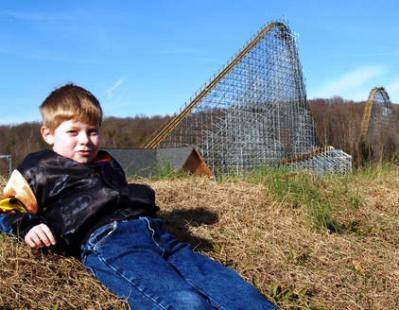 Going to work with Mom on the weekend has its perks, after all.

Plus it gives him something to write about.
___
Would you like to receive HoliBlog notices – along with news releases and sweepstakes – by email? Sign up here and you can choose whether to receive the emails weekly or the same day the blog posts are published. Thank you!