Last night was Concerto Night at our high school. The annual Solo and Ensemble contest is coming up on Saturday, so it’s nice for the musicians to have the opportunity to perform in front of a friendly audience.

James and I were sneaking in late, as middle-son John was kind enough to let us know exactly what time the Winter Percussion Ensemble, of which he’s a member, would perform.

In the hallway, another later-arrival was right behind us.

James’s head snapped around. He recognized that voice.

The look of adoration on my littlest son’s face was enough to make Will laugh.

We walked into the auditorium just before his daughter Leah performed with a percussion group.

Will wisely sat across the aisle from us. And one row back.

I glanced over at James, who chose the aisle seat.

He wasn’t watching the stage. His eyes were locked on Will’s face. You could count every baby tooth in his six-year-old grin.

Remember Eddie the dog from TV’s Frasier? That’s all I could think of; I could see Will shaking with laughter.

“James,” I whispered. “Would you like to go sit with Will?”

I didn’t have to ask twice.

My son dashed across the aisle and plopped down next to his hero.

It was a relief that when Leah’s group performed their number, James sat up and paid attention to the musicians. But as soon as it was over, he was deep in conversation with Will again; their discussion was punctuated regularly with bursts of giggles.

Both of them.
___
Would you like to receive HoliBlog notices – along with news releases and sweepstakes – by email? Sign up here and you can choose whether to receive the emails weekly or the same day the blog posts are published. Thank you! 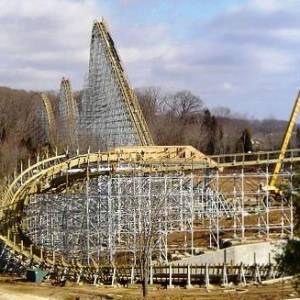 How kind of them to snap off a few photos for your viewing pleasure. 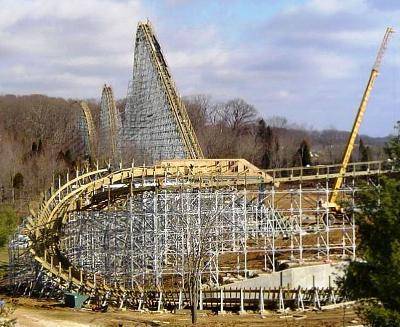 This is the view you’ll see as you walk down the pathway into the new Thanksgiving section.

The crane is lifting numerous trusses into place for the roof of Voyage’s station.

Next, we see the grand finale of The Voyage. The station is somewhere there in the middle of all that curving track. And that’s the lift hill off in the distance.

And yes, you see it correctly: one last underground tunnel at the very end of the ride.

The next photo from The Gravity Group shows another view of the insane finish to the ride and the station’s vertical growth.

In the background, to the left, you can see our employee parking lot is the holding area for all sorts of building materials.

Now let’s take a look from up around Raging Rapids:

And finally, our energetic engineers climbed the stairs of ZOOMbabwe in Splashin’ Safari for another view:

Eegads, that first drop is steep.
___
Would you like to receive HoliBlog notices – along with news releases and sweepstakes – by email? Sign up here and you can choose whether to receive the emails weekly or the same day the blog posts are published. Thank you!