Home // HoliBlog // Closing in on speeds

Closing in on speeds

The questions about “how fast will The Voyage go at (fill in the blank)” are leaving me feeling quite inadequate.

We lecture the Hosts & Hostesses to always find an answer, so I guess now I must eat my words.

Happily, I knew where to go for the answers:

You know, I guess I should ask him if he minds me calling him that. I guess I’d know by now if he did, though…

Before we talk speed, let us first review Chad’s list of music recommendations for the Thanksgiving section:

I think George Clinton’s “Fantastic Voyage” has to be a staple song in the new area of the park. Here are some others that I thought might be appropriate.

Thank You…Led Zeppelin
How Sweet It Is (I just want to stop and thank you, baby)…James Taylor
Thanks for the Memories…Various (This was Bob Hope’s theme song…did I ever tell you I sang back-up with him on this one time back in my college days? No, of course I didn’t. I was in the Singing Hoosiers at I.U., so it was a bunch of us, but a thrill nonetheless. This aside is brought to you by Paula, by the way. I don’t know if Chad has ever performed with Bob Hope.)
Thanksgiving…Heywood Banks
Alice’s Restaurant…Arlo Guthrie

Thankfully, Will already vetoed the theme from The Love Boat.

(Of course, now it’s mercilessly stuck in my head … I’ve learned from one of our HoliBlog faithfuls that this is known as an “earworm.”)

And now, onto Chad’s response to our question about what speeds our riders will experience at which elements of the ride.

As published on the Holiday World website, at the bottom of the first drop, the train will be traveling over 67 mph.

The three camelbacks on the outbound run all crest in the 25 – 30 mph range.

Speaking in round numbers, the first three tunnels will be experienced at 60, 50 and 50 mph, respectively.

The speed at the bottom of the turnaround will be about 56 mph.

Again in round numbers, the triple-down accelerates the train from 25 mph at the top to 50 mph at the bottom.

Even though the third 90-degree bank occurs late in the ride, it exceeds both of the others in speeds by roughly five mph.

The final two tunnels on the ride will be blown through at about 50 mph, the second of which is barely 300 ft from the brake run.

As if your head isn’t spinning enough from that, let’s take another swing around the station: 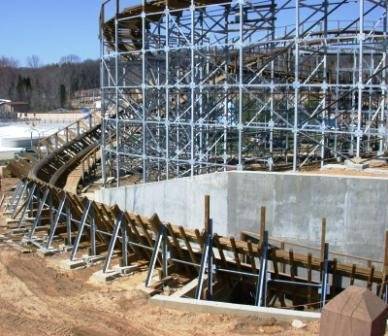