Home // HoliBlog // Throw it over the hill

“Throw it over the hill”

Throw it over the hill?

What does that mean?

We’ll get to that in a bit.

First, let’s go back to daybreak. 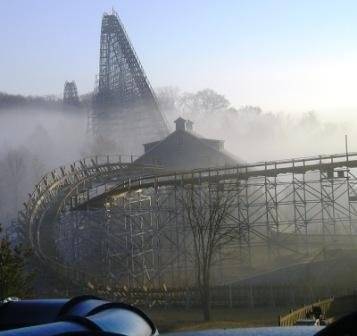 Korey, one of the Gravity Group engineers, took this photo.

What was Korey doing here at dawn?

He had a TV interview scheduled for this morning.

Danielle from the Korean Broadcasting System was here to talk to Korey and the rest of the designers. 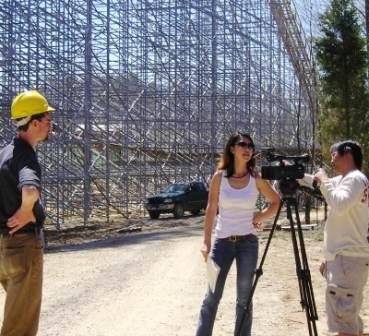 Poor Rachel tried like crazy to catch a photo of the GGG (Gravity Group Guys) together, but she said they scattered as soon as they got to the site. It had been a few weeks since their last visit and they had some catching up to do with their creation.

Later, they burst in through my office door, their enthusiasm nearly overcoming them.

The talk was all about how next week, “We’ll be able to throw it over the hill.”

Throw what over the hill?

Not trash, surely … Mrs. Koch would have their hides if they littered.

A basketball? This is Indiana, after all.

They were talking about the very first test ride.

That’s what they call it:

Throw it over the hill

They load a train up with bags of corn and throw it over the hill.

Now, my I.Q. may not match theirs, but even I could come up with a phrase a little more fitting of this monumental occasion.

“Throw,” after all, denotes a vector, does it not?

Shouldn’t we maybe come up with a term that indicates it’s coming back? Like a boomerang?

At least we could say “throw it over the hill” in an Australian accent. That would satisfy me at this late date, mate.

So what exactly are we “throwing over the hill”?

Tom at PTC took these photos recently. The shiny new trains are heading this way in plenty of time to be “thrown” next week.

As the throwing date approaches for any new coaster, a question invariably comes up from the uninformed, the uninitiated, and the un-optimistic.

Marcus from England was the first to bring it up to me:

As an eternal optimist, I have a question which I hope you might be able to answer in your HoliBlog as I’m sure I’m not the only one thinking it. How do you know that the train will make it all the way around without running out of momentum? I’m guessing the software used to design the ride is pretty accurate but is there a chance it won’t make it back to the station? Is the first time you send the train around one of the scariest moments in your life?

Thanks and hope I’ve not passed a dark cloud over Santa Claus.

A dark cloud? Was that what this morning’s fog was all about?

Chad provides us with an explanation:

It’s typical for the train to run a little on the slow side when it’s sent around for the first time. Coasters have certain spots that can be identified that pose the most risk for a “rollback.” The Voyage has very few of these spots. Only two, in fact; the safety block and the brake run. Anti-rollback steel is placed in these locations to guard against a rollback.

A big part of coaster design is energy management. We know how much energy the train has to start with (based on the height of the lift hill) and so, in order to figure out how much energy it has at some point along the course of the ride, we have to know how much energy has been removed by friction. The friction is higher on cold days early in the season than it is on hot days later in the season. By applying the “cold day early in the season” value for friction, we can spot specific locations on the ride where the train slows to the point where we deem it necessary to install anti-rollback steel. As the ride breaks in, the friction will approach the “hot day later in the season” value and those spots on the ride will no longer be a concern.

Holiday World has always done a good job of preparing their trains for the first run, thus reducing the likelihood of any occurrences. Once the train gets some laps on it, the chances of a rollback are extremely slim. This is especially true for The Voyage because of the low profile of the return run. 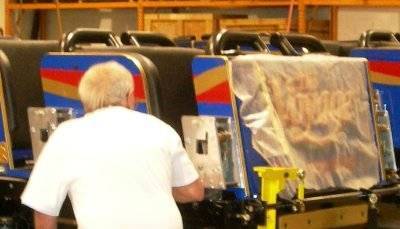 Before anyone emails me begging for a first ride, let me explain: the State Ride Inspectors must first “seal” The Voyage before the public is permitted to ride.

Plus I’d just refer you to our charity auction, which is creating quite a bit of buzz.
___
Would you like to receive HoliBlog notices – along with news releases and sweepstakes – by email? Sign up here and you can choose whether to receive the emails weekly or the same day the blog posts are published. Thank you!