Home // HoliBlog // This is more-like paradise!

“This is more-like paradise!”

That funny little phrase was uttered Friday evening by James as we walked hand in hand through the park.

The hours get long this time of year, but the burden of carrying a key is sometimes a perk.

You get to take your six-year-old son along for an after-hours HoliBlog photo shoot.

It was his idea, which should come as no surprise. He was concerned that the blog needed more photos.

So off we went

We said hi to Karen in the Christmas plaza. She has worked here seasonally for a number of years and is now full-time Rides Manager. It’s training time and she was carrying two pizza boxes. I was grateful my boy didn’t try to mooch.

On through Fourth of July to see the new walkway into Thanksgiving. We opted not to walk on it, as it looked too fresh. I remember, long ago, while growing up in Pittsfield, Massachusetts, walking along a newly painted bridge that spanned the Housatonic River near our home. There was enough tackiness left that my bare footprints remained. For months I worried that somehow I would be discovered for defacing public property.

The guilt was remarkable.

I wasn’t going there again!

Instead, James and I headed into Splashin’ Safari. Over to the tower for the AmaZOOM and Bamboo Chute. 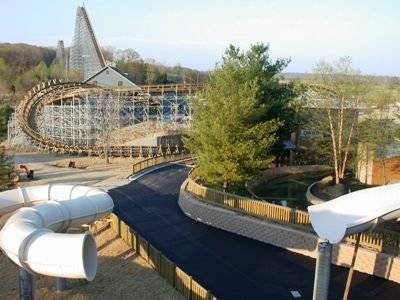 Please note that there are pieces of the reprofiled Bamboo Chute that must still be added. For proper clearance, the water slide needed a lift. Not a bad idea if it prevents the following:

Well, I took the family to Holiday World last week and on our way down to that new coaster I whacked my skull on one of those dang water slides!”

The reprofiling is in the best interest of us all

Next we headed over by The Wave, toward The Voyage.

We still weren’t up on the walkway, but you can see from this vantage point what a tangle of track awaits you this season. 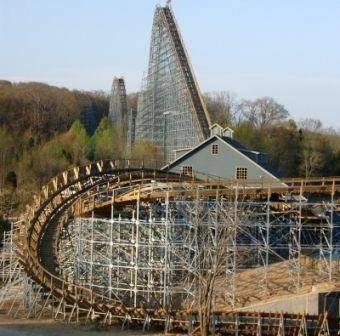 Here is a peek inside that last tunnel.

At least I think that’s what it is.

Until they throw that thing over the hill and I eventually get to ride, I’m still not positive about all this. 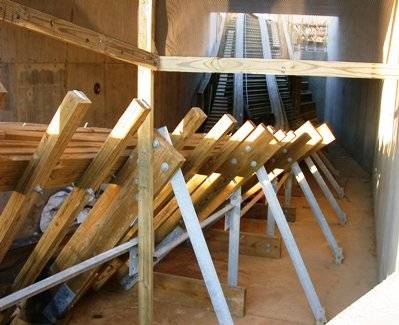 James was very patient as I took all these photos.

He made me a little nervous, though, as he kept telling me,

“I want to climb up that hill”

When I glanced over at him I was horrified to see he was pointing at the lift hill. 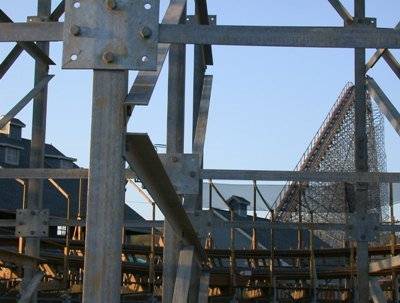 Next, we took a look at the plaza area in Thanksgiving.

That’s the Voyage Souvenir Shop on the left and the Pepsi Oasis on the right foreground with Gobbler Getaway in red in the background. 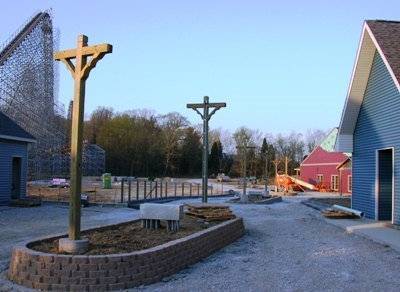 Although the sun was sinking in the west, we hurried up to look at the finished track. We even saw some deer prints in the soft ground. James wondered if they were from Santa’s reindeer and what they thought of this huge coaster in the woods.

Here’s the first tunnel and a look at the fourth hill there on the left. 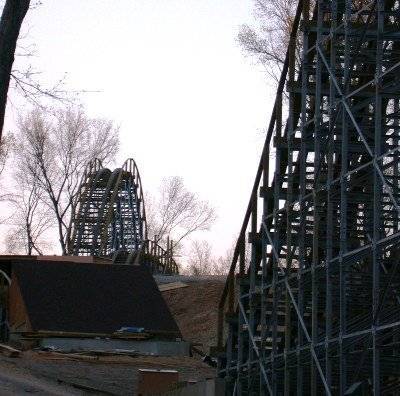 And finally, we chugged on over to Splashin’ Safari to take a look at Bahari River. Here’s a portion of the canyon: 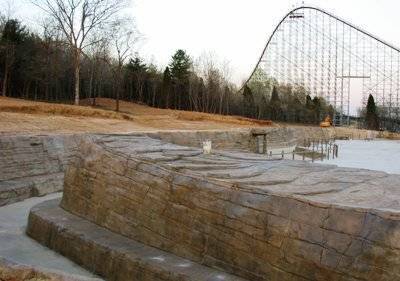 Back to the office, it was uphill all the way. We stopped to chat with Tori, who was training a ride operator on HallowSwings (he was taking the written test portion of his training).

Tori just called to leave me a voicemail. My ear is still ringing from her, “What are you doing?” It was a quizzical squeal from which I may never recover.

She had some inside information about when we might “throw it over the hill.” She wanted me to make sure to put the Gravity Group guys on alert.

James and I are heading home so that we’re all tucked into bed before the Easter Bunny makes his rounds.

A happy and holy Easter and Passover to all of our friends.
___
Would you like to receive HoliBlog notices – along with news releases and sweepstakes – by email? Sign up here and you can choose whether to receive the emails weekly or the same day the blog posts are published. Thank you!