Home // HoliBlog // One last day for the auction

One last day for the auction

The excitement is just beginning for our eBay charity auction. We’re down to the last day, so it should get wild in the coming hours.

We’ve received lots of wonderful feedback as well as a few emails asking for some coaching so that they are sure to win.

Bid more money than anyone else

I feel compelled to share that this is more than just a fun publicity stunt for me. It’s really personal.

The auction’s proceeds go to the Riley Children’s Foundation.

Three years ago, my son James and I spent ten days at Riley Hospital for Children in Indianapolis.

James was three and was totally not into flushing the potty.

It was the wrong color. Blood in the urine, that can’t be good.

Off to the doctor we went that Saturday morning. Turns out there was blood and protein, which is a bad combination.

Dr. Ruff seemed concerned; he sent us to the local hospital for some tests. Afterwards, the technician hugged me and kindly whispered, “I’ll pray for your son.”

She couldn’t tell me, of course. We were sent home to wait.

I held a sleeping James in my arms most of the afternoon, waiting for the call from the doctor. While Gary held James, I researched all sort of scary diseases on WebMD.

By late afternoon, I’d calmed myself down with the thought that during a playful wrestling match with his older brother John, a bump to the kidney area had caused the scare.

Then the phone rang.

Paula, your son is very ill. Pack a bag for the two of you and go to Riley right away.

There was no time to panic. We threw together a bag and got in the car.

Little James reached out to his dad before we left, “It’ll be okay, Daddy.”

When you live on a dairy farm, you have a very short leash. Gary, stricken, stood in the driveway as John, James, and I headed out on the three-hour drive to Riley.

When we arrived at the hospital late that night we were greeted with, “Oh, this is the little boy with kidney failure.” I wanted to deny it, but didn’t know for sure.

We spent the night in the ER and then moved up to a room. In the outside chance that James was contagious, he had to be fully covered as we rolled the gurney down the hallway and into the elevator.

Even his little face.

It was hours later before I finally could bring myself to ask a nurse if there was a chance we would lose James.

You got him here in time. We’ll take good care of him.

Later, in the bathroom, I clutched the cold tile walls and sobbed silently, begging God to help my child. And all the other children at Riley.

We were in isolation. That meant lots of masks, gowns, and gloves.

Eventually, I learned more about Hemolytic Uremic Syndrome, or H.U.S.

Remember the eColi problem that nearly closed down a west-coast hamburger chain? James had something akin to that. But we never found out what caused it, despite more than 600 tests to his blood. It wasn’t undercooked food, it wasn’t stagnant water, it wasn’t the cows at Daddy’s farm.

Two other children were at Riley with H.U.S. when we were there. They were both on dialysis; they were both younger than James.

Despite the “kidney failure” diagnosis, James’s kidneys kept working well enough that we didn’t have to put him on dialysis. At one point, 12 hours went by without him using the potty; our specialist, Dr. Leiser, told us we had two hours to go (literally) and then would need to consider more drastic measures.

Within 20 minutes, James had produced a remarkable 22 ounces.

Yes, we had to measure it. And I don’t think anyone believed me that this little fellow could produce so much.

They didn’t know my stubborn little fellow with the cast-iron bladder the way I did.

Meanwhile, the only treatment available for H.U.S. was “supportive,” meaning a blood transfusion. My hand shook as I signed the paperwork.

I asked the nurse, “Is there any alternative?” She slowly shook her head, no.

In the middle of the night, the nurses came in to check on James and to draw more blood.

“Shhhh!” I heard him admonish them, “My mommy’s asleep.”

I found out later that H.U.S. patients tend to be very irritable.

One morning, when they were drawing blood and taking James’s blood pressure for the zillionth time, he’d had it. My mild-mannered child threw a good old-fashioned tantrum.

The nurses remained calm and tried to gently soothe him while continuing their work. One of them was particularly dear, “We’re almost done, pumpkin.”

James would have none of it.

The little redhead roared: I! Not! Punkin!

Dr. Leiser later praised that behavior, telling me it was the fighters who got better more quickly.

After a week, James was finally interested in eating again. Daddy came to visit every other day, bringing “commasghetti” and hotdogs.

I’d sneak off during the visits to do some laundry, just one floor up.

While standing in the elevator, it suddenly hit me. There’s no small talk. Worried parents merely nodded at each other, but there was nothing to say.

One evening I decided James needed a sponge bath and shampoo. I asked one of our favorite nurses, Big James, for help. He told me we could unhook Little James from the monitors for a while.

When he brought me the tub of supplies, Big James talked me through all the different types of soaps and shampoos he’d gathered up for us.

“I hope there’s something in here that will make it feel like home for James.”

Tears stung my eyes. Big James really cared. He wanted to comfort my sick little boy who was so far away from his own bathtub.

After a second blood transfusion, James’s numbers turned around. A third unit was canceled. The morning of the tenth day, we were told we could go home after lunch.

That morning as I packed, I counted five “Code Blue” calls in the hallway. The P.A. call was always followed by the sound of running footsteps and then silence.

James and I were going home

How many families don’t get that happy ending?

Since those harrowing yet incredible days, Gary and I have made Riley Hospital for Children “our” charity of choice. We know firsthand how wonderful every last person on staff is — from the person who brought me a blanket and literally tucked me in as I cradled my sick boy that first night in the ER to the nurses who never showed any annoyance, to the doctors who took the time to explain H.U.S. to me until my overwrought brain could take it all in.

So if I get a little carried away and hug all 28 of the Voyage winners on the morning of May 6, I hope you’ll understand.

Meanwhile, James’s recovery is complete. Here he is riding The Raven with Gary last fall (that’s Lord Chadwick right behind them): 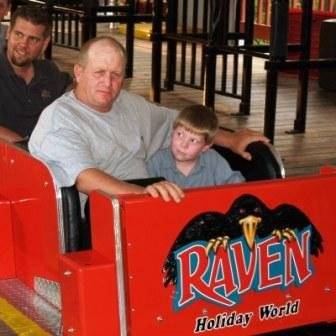 They were riding for last fall’s National Geographic Channel shoot.

Poor Gary looks like he’s had one ride too many, but there’s nothing he wouldn’t do for his little guy.

Thanks to everyone who is bidding on the auction. Your hard-earned dollars are going to a very good cause.

One Response to “One last day for the auction”