Home // HoliBlog // The view from the front, er back, seat

The view from the front, er… back, seat

As soon as word got out that the first human rides had taken place (we’ll talk more about Fred the Test Dummy later), the emails started pouring in.

Everyone wanted to know Will’s reaction to his first ride on The Voyage.

So I emailed him, asking if he had time to submit a “trip report” for the HoliBlog. Even a voicemail would do; I could transcribe it for him.

This morning my Inbox contained the following from Will. It was sent at 2:17 am (too excited to sleep?):

On Thursday, April 20, I took the first ride on The Voyage

On the first train, I rode with Steve Meunier (Director of Development) in the front seat. Mike Kamp (Director of Safety and Maintenance) and Jeff Mason (Construction Foreman) rode in the seat behind us.

I’d decided to try the front seat first because I wanted the most open view possible on the first ride. The station was packed with Holiday World employees, including Luis, Obri, and Jose (former Custom Coasters employees who were part of our coaster-experienced construction crew), and their entire crew.

First, there’s the thrill of actually experiencing something that we’d worked on so hard and so long. We’d started the project in earnest at IAAPA 2004, when we’d reviewed preliminary designs with Larry Bill, Chad Miller, Michael Graham, and Korey Kiepert of The Gravity Group. 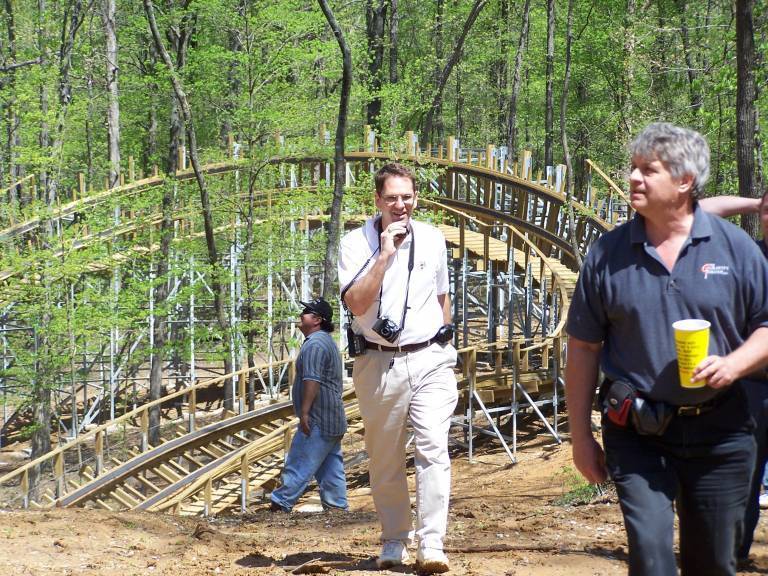 In all honesty, this coaster matches my initial vision more closely than our first two projects, Raven and Legend. It really is exactly what we envisioned and asked Gravity Group to design those 18 months ago.

Second, is the context within which all of this is occurring. During the past three weeks, our construction site has been an amazing zone of productivity. We have so many people (200 at last estimate) working so hard, and accomplishing so much in such a short time. I visit the site twice a day unless there’s something specific I need to check on, and every time I visit, there is visible progress. So, the opening of The Voyage is one step in this amazing process of getting Thanksgiving and Bahari River prepared for opening day.

Third, is the raw pride that I feel in our family park as a whole. We’ve done so much in so few years, and have grown our park so much while retaining family ownership and control. The Voyage is a new symbol of what we’ve accomplished during recent history, and of what we will do over the next 10 years. This isn’t the end our growth cycle, it’s a “midpoint.”

I also take great pride in the level of commitment and productivity our wonderful team exhibits on a daily basis. It is such a pleasure to get to lead an organization that is so committed and devoted.

So, that’s the “pre-ride” environment

Then, we give the word, the brakes release, and we’re rolling out of the station toward the lift hill.

While I love launch coasters, there’s something to be said for the build-up of anticipation ascending a traditional lift hill.

As we ascend, I look back toward Holiday World and Splashin’ Safari, admiring the view. It’s beautiful in all directions. To our left, I notice that we’ve poured the concrete walkway leading from The Wave to Bahari River, taking that project one step closer to completion.

This is a big lift hill, and the feeling of being “way up there” sets the tone for the beginning of the ride. The first drop is 66 degrees (did I mention steepest on any U.S. wooden coaster?).

Hanging over the crest waiting to release, the hill looked and felt vertical.

Then we were off

The first three air hills were very good. This was only the 24th circuit for the track and train, so I know it’ll continue to get faster and faster. This increase in speed will have a big impact on the air moments on the hills on the out-run.

We caught great air on this ride, but I know the air hills will get better and better as the trains and track break in. In addition, I would find out shortly that the difference between the front and back seats on this ride is amazing. The Voyage, like Raven and Legend, is a back-seat ride. With a seven-car train, the difference between front and back is greater than on the Raven and Legend’s six-car trains.

One of the first big surprises for me was the cool air in the first tunnel. The difference in air temperature was striking, and I’m sure our riders during the summer will really appreciate the cool moments in the tunnels.

In the front seat, the crest of the fourth hill was a little disappointing. It’s better in the back seat, and again, I’m sure will improve dramatically with break-in. To me, this is the beginning of the turn-around, which feels like the “second part” of this monster ride.

The track gets very twisty all of a sudden. The pace picks up nicely. The Gravity Group Guys have done an incredible job filling every moment with something interesting, and keeping new things coming all the time.

Riders who’ve done the online ride will notice many subtle changes from that version to the finished product.

Thank The Gravity Group for not leaving well enough alone!

One of the great things about the turnaround is that it’s completely hidden until you ride it. Because the bottom of the hill (the turnaround curve itself) is about 60 feet lower than the crest of the hill, and we chose to keep the track low and fast in the turnaround, this is a high speed, exciting element.

As we start back up the hill, we go through the reverse-banked curve (nice touch–adds variety), and then enter the back-to-back 90’s.

This works very nicely and is just a nice bit of track.

The 90’s aren’t a gimmick. They just work as track elements, and feel like a very natural part of the ride. In the front seat, I felt that the second 90-degree section was a little slow, but the push we felt as we passed through the curve and headed for tunnel three and the exit from the turn-around gave a big hint that this element would feel very different in the back seat, and as break-in progressed.

So, then, tunnel three, and a slow climb onto the spacing brake. This works exactly as I’d hoped. You kind of catch your breath, and enjoy the pause. I have a hunch many of our riders this summer will think the ride is slowing down and nearing the end.

Of course, nothing could be further from the truth

From here on, the ride accelerates relentlessly, as the pacing increases from medium to crazy.

The first element after the spacing brake is the underground triple down. I thought this worked extremely well. We’re not moving extremely fast yet, but the three drops in the tunnel are a great “kick-off” to the “third part” of this ride. For me, this is the best part of the ride.

One of my fears in building such a long ride with only one lift hill was that the ride would run out of gas at the end. However, our topography is now working for us, as we accelerate down the hill toward the station. The pacing here works exactly as intended, with the time interval between “elements” getting shorter and shorter as we near the end. 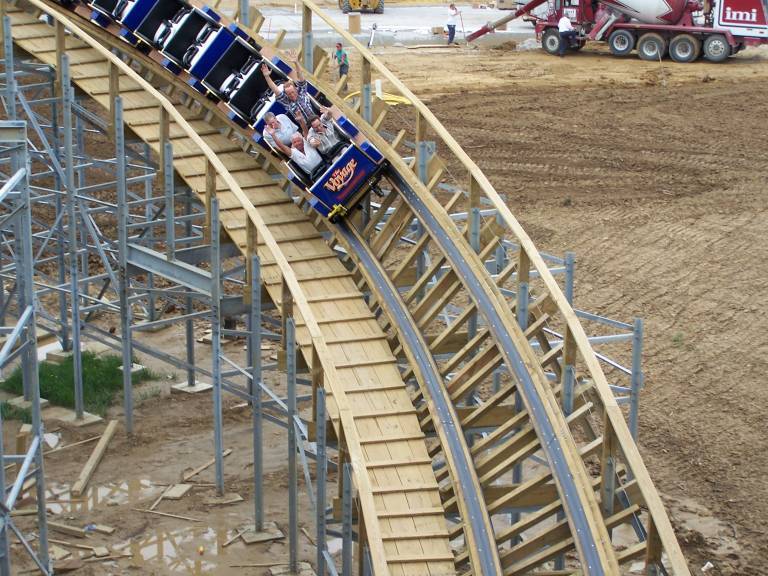 As we roll downhill, the station gets closer and closer. The track entering and exiting the station and leading into tunnel five is some of the best on the ride.

I think many of our Guests will have forgotten by this point that the ride doesn’t end at the station, but goes through it.

After exiting the station, the final section of track leading to the brake run is an exclamation point on the end of the ride.

This very long coaster ends with a bang 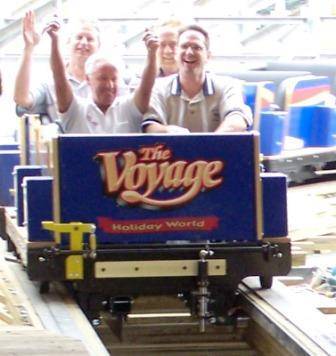 We have plenty of energy left for a big finish and to hit the brake run strong. This track is also the most visible part of the ride for spectator viewing, and I’m sure will draw plenty of attention from both riders and non-riders.

I’m almost a little embarrassed to admit that the conclusion is almost a little more than I bargained for. At the end of this long ride, I almost found myself feeling ready for the ride to just end.

I guess to summarize, it was everything I’d dreamed of. The Gravity Group outdid themselves in tweaking the design, and maximizing every moment.

Particularly in the high-speed sections, where the ride could be marred by a bad shimmy, the train moves very well. And I’m optimistic that the steel structure (and thicker side steel) will help us to postpone major track work for a very long time. It is a great ride now, and as it breaks in, it’ll only get better.

Where there were a few slow moments in the front seat, in the back seat, there were no slow spots to gripe about. I’ve said many times that the best measure of a ride is the riders’ expressions at the end. I couldn’t see my own face after my first back seat ride.

But I know how I felt. I think my face showed my sense of awe.

After just a few more than 30 cycles, this was already an amazing ride.

It’s hard to imagine what this ride will be like during the heat of the summer, after a thorough break-in period.

I think it’s safe to say that a new era in wooden roller coasters has begun.

What a wonderful Voyage it is going to be! 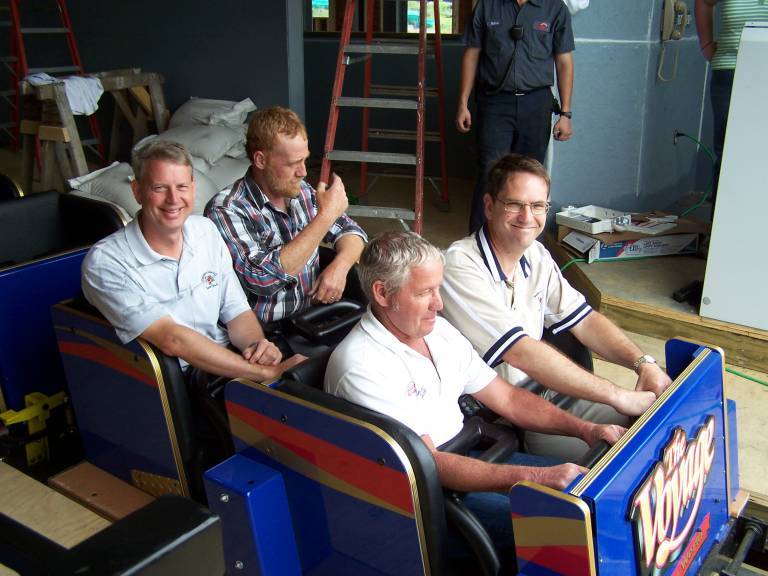 One Response to “The view from the front, er… back, seat”