It’s not just roosters and hens that roost. Turkeys do, too.

Last fall, we got a lot of questions about where Turkey Whirl would be located in the Thanksgiving section.

At first we didn’t know. There were several options being considered.

But eventually the decision was made. Right smack between The Voyage and the Plymouth Rock Cafe.

Here’s the view from the coaster’s exit. Turkey Whirl is scheduled to arrive next week. A few days later, it’ll be up and running. And then the call will come out over our two-ways: All units, we need volunteers to ride the new tilt.

Brandon already sent Tori a note reminding her to be sure to come prepared with a bucket of sawdust. 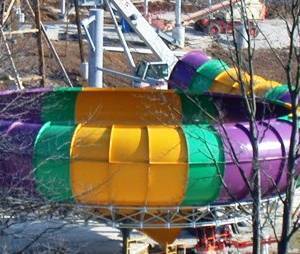 How cool is this?

It’s all in the news!

An incredible tribute to this super Bowl Ride we’re building.

The newscaster had congested nasal passages. it seems; he kept mentioning it was so “colt” out. I guess he wanted to be sure folks knew Bakuli wouldn’t be open until the weather warms up.

… and I didn’t catch it all, but I think he made a joke about bears wanting to take a once-in-a-lifetime ride. He must have been talking about one of those polar bear clubs or something. I got a kick out of how often he mentioned it would be great to visit our super bowl on a sunny day. 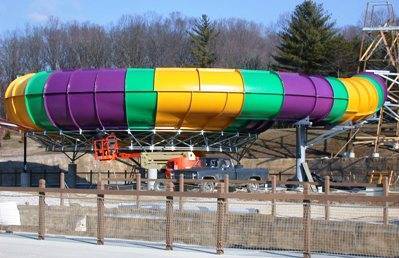 Rachel braved the “colt” to take these photos. 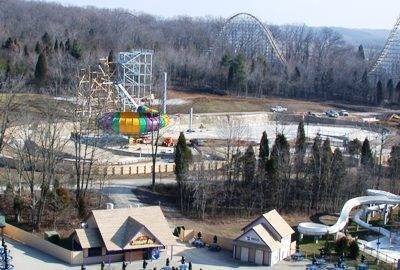 I think she climbed to the top of ZOOMbabwe for this one. She wanted to take a wide shot to help us get our bearings.

Looks like a real winner has touched down in our water park.

Korey, one of the four Gravity Group guys, likes to stay in touch.

Right before the holidays he wrote to tell us that Lord Chadwick had just become Lord Dadwick.

You’ll be pleased to note that all four of those super-intelligent, wildly creative, admittedly geeky engineers are tender-hearted family men.

Here’s the latest missive from Korey: My 2-year-old daughter Kaitlyn and I were playing with some of her stuffed animals, including her stuffed Holidog this past weekend.

When I asked her where Holidog was from she smiled really big and said, “Holidog World.”

It has a nice ring to it, don’t you think?

The past two nights she took a Holiday World brochure to bed with her. My wife thinks I am warping her … I just smile a proud-parent smile. Anyone else feeling a little woozy? …and speaking of huge hairy monsters, our Director of Games was also at the IAAPA Convention.

The huge, hairy monster in reference is Shrek.

If you've been to see a movie in the past six months, you've no doubt seen the trailer for Shrek the Third, which is coming out in May.

One of April's interests while at the convention is to see all the new plush offerings. She then prognosticates which ones will be the most coveted six months down the line and places some huge orders for her department.

April had no problem viewing the cute little penguins, the colorful Care Bears, and the bouncy-bouncy basketballs.

But when she wanted to check out the Shrek merchandise for 2007, everything changed.

The Baby Shrek plush, it seems, is classified.

And behind closed doors.

And the top-secret plush won't even be shipped until the wee Shrekling has been introduced to the media sometime in the spring.

Her eyes danced as she later told us how cute those Baby Shreks were.

Come to think of it, though, she offered no description.

The rest of us may get to see roller coaster layouts way ahead of time. We'll be the first to sample the goodies at the Plymouth Rock Cafe. We'll even get to try out Turkey Whirl next month and sample various new brands of toilet paper.

But when it comes to the Shrek: The Next Generation, we're in the dark along with everyone else. We can’t see all seven turkeys in this photo, but here’s the latest picture of Turkey Whirl: Shouldn’t be long before these birds take flight for their new home in Santa Claus, Indiana. 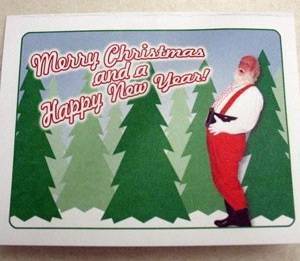 Our Christmas card made the Associated Press!

Well, one of AP’s blogs, anyway.

Scroll down … they even show the envelope. 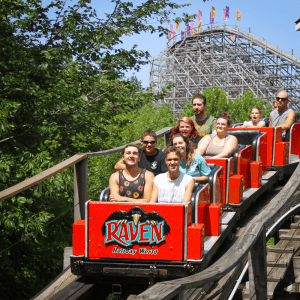 Anyone receive a calendar for Christmas?

While perusing ’07 calendars at a Barnes & Noble last month, I nearly spit out my Hollyberry Ho Ho Ho and a Sprinkle of Nutmeg Latte.

There it was: a coaster calendar featuring The Raven as its May photo.

I could see a little thumbnail shot of The Raven on the back cover, as the calendar was one of those shrink-wrapped jobs so flipping to May was not an option.

There it was … a nice photo of the swooping turn over Lake Rudolph … with the standard identifying caption:

Of course, once a mistake is in print, you’re stuck. And since their website says they’re Sold Out, you may not have much luck finding a copy of your own to snicker over all 31 days of my birth month.