It’s that time of year when leftovers aren’t a burden. They’re appreciated. Cherished, even.

So I knew you wouldn’t mind a leftover story from this summer.

It was when “Deal or No Deal” came back to town.

More than a year ago, the GM over at Santa’s Lodge was chosen to be a contestant. Surprise! It was to air on Christmas day.

Skip is normally a pretty quiet guy. Pleasant, but not someone who seems to crave attention.

Until he’s under the kliegs. Then he comes alive.

Skip won a heap of money, but he couldn’t tell us till the show aired. (He’s on the County Tourism Commission with me; we all noted he was wearing a nice leather jacket the week after he taped the show and nodded at one another knowingly.)

Well, back during the season a crew from “Deal” came back to town. It seems our Skip is one of their most popular contestants ever, so they wanted to shoot an update of Skip here in the town of Santa Claus.

So he brought them to Holiday World. 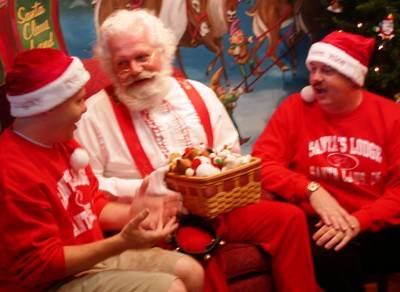 That’s John on the left. He works for the show. You know the guy in the middle. That’s Skip on the right.

And then it was off to ride some rides.

Skip “whoo-hooed” his way through the day. It was unbelievable the energy he put into this shoot. 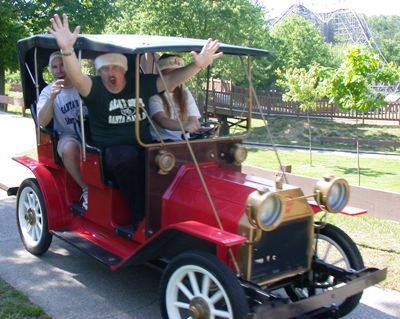 Uh, sir … please keep you arms, legs, hat, and enthusiasm inside the ride at all times.

Next, over to Raging Rapids.

Skip was still full of pep.

And he got the entire family, plus John, in on the act.

As the boat headed off toward the rapids, guess who was still whoo-hooing? 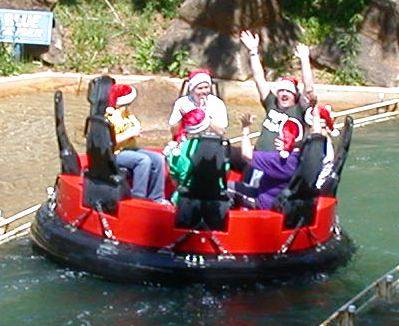 “Who is that?” I was asked over and over.

People were amazed when I told them it was the GM from Santa’s Lodge.

“We’ve been there for three nights and haven’t heard a single whoo-hoo.”

That’s probably because he was saving himself. By the end of the day ol’ Skip was getting mighty hoarse.

Too many candy canes, maybe?

I whispered to John and Josh several times that I’d be glad to take them all to lunch. A nice grilled-chicken salad would have hit the spot by mid afternoon.

But we pressed on.

When Skip finally ran out of steam, we stopped for a snack. Four orders of deep-fried Oreos.

And then we were off and running again.

Santa had agreed to join Skip on The Voyage. 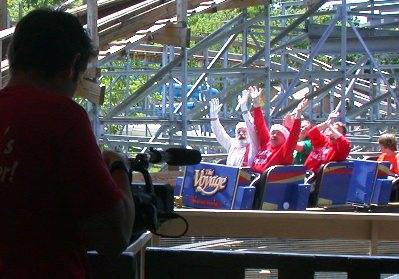 And all these months later?

John and Josh finished their road trip and got to work editing.