Any guesses as to what Elmer, Lee and Nick are up to?

…chances are you may not have seen it from this side: I still say we should all have satellite TV access in our offices. Look at the size of that dish! A little math problem to enjoy over lunch: Some of the lovely dessert items offered at Plymouth Rock Cafe (during the season).

When I explain to others that with Twitter, the microblog phenom, you're limited to 140 characters per post, they cannot fathom such minimalistic communiques.

So it's perfect that a fellow tweeter would post this in response to my tweet that (as of yesterday) Christmas is just two months away:

Thanks for the update… I usually just check http://isitchristmas.com/ 🙂

A few more pics from a few weeks ago … They carefully strap up the coaster cars for one last ride of the season. Well, not really nowhere; not if you're wanting to park your car.

We'd mentioned that, along with Pilgrims Plunge, we're adding a new road for next year.

Poor Lisa. I asked her to go take some photos last week that would include enough landmarks to put the location into perspective.

…oh, and do this without getting run over, please. Where are we? That's the stop sign in Santa Claus when you're heading south on 162 from Ferdinand and Interstate 64 exit 63.

Next May, the stop sign will be gone, replaced by one of them-there new-fangled traffic lights.

(Sorry, there's something about the town's first traffic signal that just demands a celebratory hoot.)

Continuing … when you're on this road and on your way to Holiday World, there will be two lanes that will take you straight across to the Legend parking lot when the light is green. (Of course, the left lane will also be a turn lane if you want to run by Santa's Candy Castle for some frozen hot chocolate first.)

Next, a still-alive Lisa made her way to the other side of the site, to show how it looks when you're facing north.

That's Liberty Launch in the background. That's all we know so far. As work progresses we'll keep you posted.

Anita and I have become email buddies over the years. She'll email to ask about 4th of July fireworks, or for advice about which days will be the best for a visit.

Today's email made me laugh out loud. She said it was okay to share it:

My 5-year-old daughter fell in love with the HoliDazzles this year when I took her to Holiday World. She does have some concerns however. This was our conversation last night.

Yes, it’s closed until next May

How many days is that? Is it more than 50 million?

No, it’s much less than that. It’s just a few months.

How many months? Twenty months?

At this point I drag the calendar out and show her how long it is until May!

Mom, what is Sparkle going to do this winter when it’s cold? Won’t she freeze if Holiday World is closed?

No, Sparkle will be fine. She’ll go home for the winter and come back in May.

Mooooooooom, didn't you even pay attention at the show? Sparkle LIVES in the 4th of July section. Duh.

Oh, I forgot about that.

She’s going to freeze to death, isn't she?

No, I promise she will be fine.

Would you ask Holiday World and make sure?

You promise Mom? You PROMISE you will ask Holiday World tomorrow and then let me know after school tomorrow.

Sooooo, I am keeping my promise. Would you please write back and tell me that Sparkle will not freeze to death this winter so I can tell Kaylee and she won’t drive me nuts until May? And by the way, am I the only parent who can’t get that “have a dazz dazz dazzly day” song out of my head? I wake my kids up with that every morning now just to annoy them. I've been threatened to stop, or they won’t take me to Holiday World next year. It’s a risk I’m going to have to take. Hi Kaylee! Your mom sent me this cute photo of you. It is so kind of you to think about Sparkle and be concerned for her comfort and safety. Don't worry! We love Sparkle, too, and make sure she's having a wonderful "off season." I think she's even planning a long vacation — she wants to visit Santa at the North Pole! I know Sparkle would want me to tell you she loves you and can't wait to give you a big hug in May. I know your mom will show you the calendar and help you count the months. Meanwhile, keep singing the HoliDazzles songs and be sure you stay warm all winter, too! 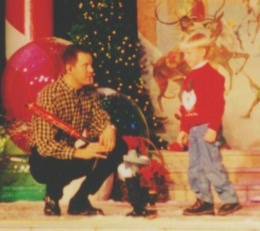 Came across some “archival” photos that I thought would be fun to share.

They’re not exactly ancient, but they were taken nine years ago.

During the last century.

The day QVC broadcast live from the park was a hoot.

The production crew arrived on Sunday, October 24, 1999, to set up for a live broadcast the next day. They drove in with a huge motorcoach, a box truck, and a semi truck. It was wild.

They set up in the Holiday Theater to give it the look of Santa’s Workshop. 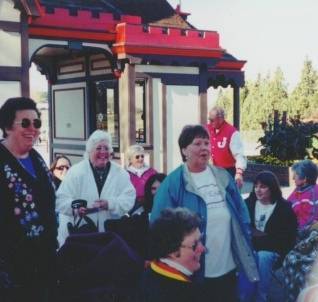 Early the next morning, even though word was out that the gates wouldn’t open until noon for audience members, there was a crowd.

When I arrived around 7 am, they were already here. This cheerful crowd of extreme QVC fans.

I went out to say hello and make sure they knew it would be hours before we could let them in (the QVC folks had even hired security!).

No problem. They were all having a good chat about their favorite shopping channel.

It tickled me to watch and listen as they compared QVC rings and QVC watches. Some were even sitting on QVC camp stools and sipping from QVC thermoses.

The media arrived to cover the … uh, media. 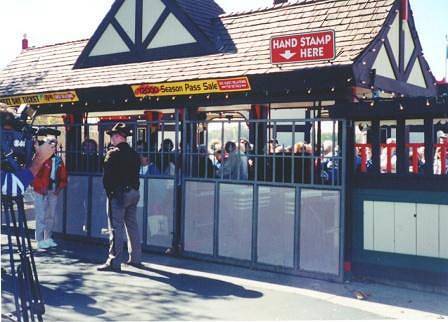 The moment that sticks out most in my memory is when the host, David Venable, walked from the theater toward Kringle’s Kafe.

You’d think he was Sinatra.

Suddenly the security detail made sense. A rockstar was in our midst.

David turned, smiled, and waved. And kept walking. (Apparently he’d heard about Kringle’s pizza. Can’t have the host’s stomach growling on live television.) Later he came out and chatted with the fans. It was surreal.

When the gates were finally opened, the fans (in their QVC hosiery and shoes, no doubt) hurried to their seats.

Somehow the theater was filled, but we didn’t have to turn anyone away (we’d prepared a live feed for outside the theater just in case).

The audience roared as the show went live.

If memory serves, they sold many Betty Spaghetty dolls. Betty’s brother (you guessed it — Eddie Spaghetti) was also available.

Also that goop in a tube that you can use to make huge balls. Those were tossed out into and around the audience, with me praying one didn’t hit a light. Can you imagine the smell of hot, dripping goo?

Hot, dripping, smelly QVC goo. There would have been a riot.

Happily, no one had that strong of a punch.

Throughout, David was a pro. 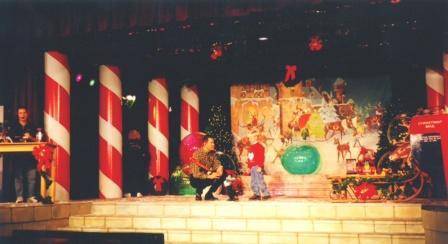 That little fellow is none other than Willam A. Koch III.

He’s Will and Lori’s youngest child.

Goodness, the little chap will be heading off to college in just a few more years.

When that time comes, I’ll be sure to provide plenty of empty QVC boxes from my basement to pack up his stuff.