Been bugging the engineers at The Gravity Group for more photos of our new Timberliner trains.

Testing of the new trains for our Voyage roller coaster begins in just a few weeks, and the parts are in painting-and-assembly mode.

Korey was kind enough to send a few.

In Korey’s words: I took a field trip today to the shop that is handling the fiberglass work on our Timberliners. They are deep in the process of producing the front and side fenders for your Voyage trains.

This first photograph shows seven of the fiberglass fronts that will attach to the foot box on each car. The second photo shows the fenders that go over the road wheel. They are working with 6-7 pieces at a time. When I stopped in they were smoothing the pieces down in preparation for the painting, which they are planning on doing tomorrow or Monday. Back in Santa Claus, we’ve turned on the water to begin the testing process for Wildebeest, the world’s longest water coaster. Photos are posted on our Facebook Fan Page.

My new pal Steve at Matt Davenport Productions in Nashville (as in Tennessee) put together a little introductory video showing our entertainers’ first rehearsals over the past weekend.

And yes, as a special treat, you get to see Will in jeans. (What next?! Cowboy boots and a 10 gallon hat?) Looks like we’re in for a fun season…

…he wants Daddy and Mommy to take him to Holiday World!

This little fellow is only a few weeks old, but already he’s pals with Holidog.And he has his first park shirt (okay, it’s a onesie)

His dad, Jeff, is the coaster geek who founded CoasterBuzz. (Little Simon is bound to be a chip off the old block.) I am incredibly excited because I just found out about The Wildebeest in the hallways at school and got on your site to check it out.

I have been going to Holiday World once or twice a year ever since I was very little, and I would just like to thank you for rewarding visitors like me by re-investing money into the park. I think it is incredible how you have been able to add multiple attractions every year. Not just little attractions like bigger commercial parks add, but exciting attractions that are extremely popular with my younger age group.

I live about 90 minutes away and I already know of 3 dates this year I be coming over to enjoy the park I’ve grown up loving.

Thanks again for making a fun, affordable, and most importantly family friendly park for people like me to enjoy.

But I’ve always wanted to write that.

What we can show you, though, is the underbelly of the Wildebeest’s boats. Will that do? These aren’t your run-of-the-mill inflatable pool rafts, bucko. These boats contain the other half of what makes the Linear Induction Motor (LIM) technology work. As in a sheet of steel. These puppies are heavy!

Will is an engineer; we’ll let him explain:

“An alternating magnetic field beneath the slide surface propels the rafts, pushing them rapidly and smoothly uphill. LIM technology is a popular feature in some steel roller coasters; it’s cool to see it applied to water coasters, too.” Sure do like those seatbacks. Looks sort of non-invasive, if you know what I mean.

We hit the "just add water" stage next week. Then testing starts next month.

Watch it all happen live on our webcam.

When we first talked about starting an online shop, the thought of asking staff to model for the photos appealed to us.

Our people, after all, are an important part of our "brand." (That’s marketing talk for families-are-us.) Above are Jennifer and Lori, the manager and director of Splashin’ Safari. They’re trying out the new Wildebeest beach towels that arrived recently for our shops, including our online HoliShop.

Here’s a more passive approach to beach linens. Our marketing coordinator, Andy, stretches this Holidog towel to its full height (Andy, by the way, is six and a half feet tall). If you’d like to shop around, here’s the link to our HoliShop.

Thanks so much for the printable online Allergen Free Menu. We will be returning for the 2nd time this year, and I am again SOOO excited to see so many options available that my kiddo with severe egg and milk allergies will be able to enjoy.

It means the WORLD to us

… that you have these options available, that someone there is so knowledgeable about these food allergies and that all the needed details for safety are in place. So much so, that we are ready to move closer to HOLIDAY WORLD and spend the summer!

I just wanted to thank you all for going out of your way to prepare a listing  of gluten-free foods.

Every year our family takes at least 1 trip to Holiday  World and after being diagnosed with Celiac Disease, I wondered what I would  be able to eat or what I would have to bring with me.

This year I will be  visiting your site three times – as a school club sponsor, with our church  youth group, and as a family.  You’ve made it so much easier for me to enjoy  myself at the park.

The Kochs had arrived back from the annual IAAPA convention all excited.

Mrs. Koch cracked us up at the next directors meeting. Apparently Will and his dad were pretty fired up about these new-fangled guy potties.

"That’s all they talked about — all dinner long," Mrs. Koch wailed. "And we were in a really nice restaurant with other park people. All the men talked about were urinals!"

I felt my cheeks burn with a deep … flush.

Before long, I got over my mortification and pitched a story to the trades. Indeed, Holiday World was breaking ground again. Just one year after introducing "Free Unlimited Soft Drinks" to the industry, we were the first park to add these mysterious new waterless urinals.

For some reason, the coaster enthusiasts seemed particularly enthralled with the news. The female enthusiasts demanded to see what was going down. So when we held our annual coaster-riding event for them that May, we made special arrangements.

We called it the "Ladies Only V.I.Pee Tour."

Will and Mrs. Koch headed the tour, armed with Super Soakers. At one point after explaining the inner workings of the waterless wonders (in his customary scientific manner), Will was suddenly overcome with embarrassment, hung his head and sort of stood in the corner. (A urinal-free corner.)

This morning, Will sent me this photo, marked "Must-blog: Pixie Urinal." All I could think was, "Here we go again."

We were meeting today with a vendor who told the following story: One of the ladies who works in their office got a phone call, asking if the company could supply them with some more of the "pixie urinals." Needless to say, the folks in the office were confused, and couldn’t guess what the customer wanted. After thinking it through for a while, they decided the customer was referring to the part in the photo (it’s actually a charger for a handheld/wireless scanning device). At the customer’s company, they have quite a few of these (maybe 10) lined up on a shelf. I can’t disagree that they would indeed look like the urinals for people (pixies?) who would use a very small men’s room.

Here’s a photo of the "pixie urinal" being used as originally intended: And so now, Will, I have blogged about the pixie urinals, as requested. 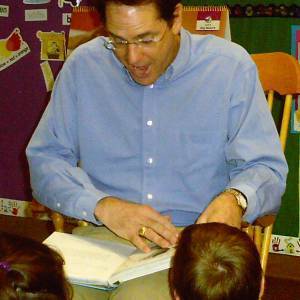 Did you celebrate yesterday?

Maybe an extra helping or two of green eggs and ham?

Or a bit of reading to smallish children? 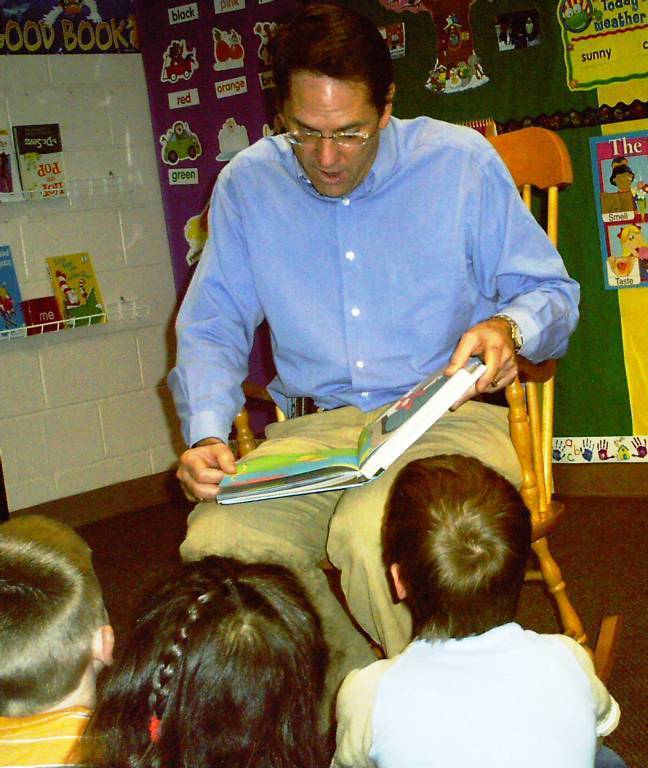 Sarah, who’s worked in our merchandise department for years and years, asked Will to come to her school yesterday to read to a wonderful group of kindergartners.

As Will was leaving our office yesterday, explaining where he was going, GM Matt said, “You know it’s Dr. Seuss’s birthday, right?”

Will stopped dead in his tracks. 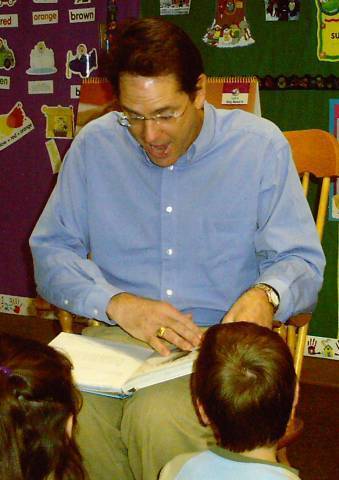 And off he went.

Here are a few Dr. Seuss gems that surely fit the day (or any day):

Today you are you, that is truer than true. There is no one alive who is youer than you.

If you never did, you should. These things are fun, and fun is good.

I meant what I said, and I said what I meant. An elephant’s faithful, one hundred percent.

You have brains in your head. You have feet in your shoes. You can steer yourself, any direction you choose.

And will you succeed? Yes indeed, yes indeed! Ninety-eight and three-quarters percent guaranteed.

From there to here, and here to there, funny things are everywhere.

Don’t cry because it’s over. Smile because it happened.