By any chance were you here on Labor Day Monday?

And did you dare to try to tame the Wildebeest on such a chilly day?

In that case, you just might see (or hear) yourself in this new video, produced for the folks who created Wildebeest – our friends at ProSlide:

Ten years ago today, we said good-bye to a wonderful man.

Bill Koch devoted his life to developing Santa Claus Land and the town of Santa Claus.

Bill and Pat Koch made quite a team.

Here there are in 1999, trying out one of the trains for The Legend wooden coaster, which opened in 2000. Nathan put together this video tribute to Mr. Koch, which will be shown at this afternoon's Golden Ticket Awards ceremony.

Thanks to Rick Sebak at WQED public television in Pittsburgh, for sharing this interview footage of Bill Koch, shot in 1998 as part of Rick's "Great Old Amusement Parks" documentary. 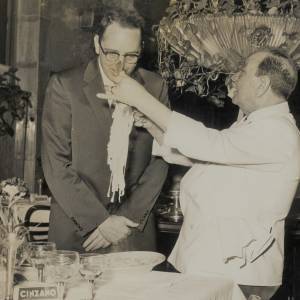 When a family-owned business has been around for 65 years, there are always new discoveries.

By that I mean … we’re forever finding precious old photos and mementos tucked away in odd places.

The other day, Mrs. Koch bounded into my office carrying a big box.

Look what we just found in the attic over Liberty Bell!

It was, indeed, a treasure trove of Koch and Santa Claus Land memories.

They’re one and the same, really. Can’t separate family photos from park photos.

There were old photos, slides, movies … Now why in the world would we have an old menu in storage?

And one that’s written on, for heaven’s sake!

In 1955, Bill Koch (five years before he married Santa’s daughter, Pat Yellig) went on an around-the-world tour. He was quite the adventurer and enjoyed himself immensly. Nowadays, he would probably have been a blogger, but back then, he typed up “letters to home” about his trip, which were eventually made into a book for his family members. Honest, this is Alfredo. This is the wonderful Italian who created the soothing mixture of noodles, butter and parmigiano cheese to help his expectant wife regain her appetite (Alfredo II was on the way, after all).

Alfredo loved to make theater when he prepared his pasta dish for others. Although not a boisterous man, Bill Koch instinctively knew how to promote. He put Santa Claus, Indiana, on the map.

Can’t help but wonder if that delicious plate of pasta, prepared with a proud flourish, might have inspired him in any way.

We lost that wonderful man not quite a decade ago. Nathan and Mrs. Koch are working on a tribute video, which we’ll post here in a week or so.

Meanwhile, for those of you who are intrigued by the menu cover, we scanned the inside and back for you. —–
Would you like to receive HoliBlog notices – along with news releases and sweepstakes – by email? Sign up here and you can choose whether to receive the emails weekly or the same day the blog posts are published. Thank you!