Back in 1994, it was such a thrill to take part in naming our first big roller coaster. We knew it was going to be built in our Halloween section, so there were nearly endless theming ideas.

It turned out to be a rather creepy experience.

The first shivery chill occurred on a very hot day

Will had invited Tim O’Brien to visit during August of 1994 so he could walk the future coaster site with us. Tim was an editor with the now-defunct Amusement Business, so giving him an off-the-record tour and a peek at the design plans was pretty exciting.

Fun, too. Tim’s love of the industry and affection for family-owned parks kept him grinning all day.

As we walked together down the paved path that used to be home of the Santa Claus Land “tour tram,” Will pointed to our left and described in great detail the planned lift hill and first drop to Tim.

My mind wandered a bit as those two geeked out over angles of descent and rates of acceleration.

What in the world will we call this thing? I wondered to myself, grateful for the old-growth trees and the shade they offered. My first thought – I swear – was “The Raven.” Swooping through the thick woods, with a nod to Edgar Allan Poe’s classic poem, The Raven would be a simple, memorable name.

I snapped out of my fog when I heard Tim ask Will,

“Have you thought about names yet?”

Without missing a beat, Tim offered: “The Raven. There’s no other coaster with that name. It would be a great fit.”

When Will headed back to his office to work on some of Tim’s other suggestions (such as to have the track hug the ground at the bottom of the fifth drop – thanks, Tim!), I grabbed his arm. “Yes! I love the name Raven!”

Back in the mid-’90s, research was a bit more of a grueling process than it is today. I made a trip to the Lincoln Heritage Public Library in Dale (birthplace of Florence Henderson) to get to know Poe a bit more.

Interesting: Abraham Lincoln and Edgar Allan Poe were born just a week apart, in February of 1809.

Also of interest, Edgar shares a birthday with Will’s wife, Lori. January 19 is Tim’s birthday, too.

Once settled in at the library, surrounded by stacks of research books, the air took on a sudden chill.

By the time I left the library, I was convinced we shouldn’t dare to name our coaster anything but Raven.

Here’s what I found:

On May 6, 1995, when we premiered The Raven, little Leah Koch (only five years old at the time) opted out of riding in the very first train at the last minute. As scores of coaster enthusiasts looked hungrily toward that empty seat and then pleadingly toward me, the decision regarding who would fill the empty seat was simple to make.

“This seat is for the spirit of Edgar Allan Poe.”

As the train left the station and climbed the lift hill for the first time … clicking, clicking … we all knew it would thrill riders. 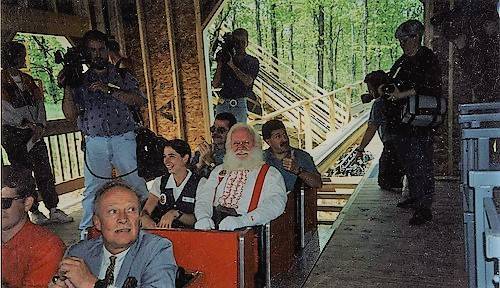 Tim O’Brien, who named Raven, is seated in the very back seat of this first train in the above photo (he’s on the left, wearing sunglasses).

And below is the front of the train for Raven’s First Flight on May 6, 1995. Holiday World’s president Will Koch is in the front seat with Denise Dinn Larrick, the president of the ride’s designer, Custom Coasters (which is no longer in business). One Response to “A Halloween tale”