Our test dummies aren't particularly pleased; they've been asked to give up their seats on Mammoth.

Well, all except when Dan feels sorry for them and sneaks them on a ride with him. Been watching our Mammoth animation all winter? It's time to see the real deal:

When it was time for Dan to take his first ride on Mammoth, he invited a few friends to come along. Here's a video of the full ride:

How warm is the water? Check here on our website.

Dan's been pretty excited about adding cabanas this season. Folks have been asking for them for years, and we finally made it happen.

Opening day at Splashin' Safari, long before the waves were turned on, I heard Dan's voice over the 2-way, calling to IT to add a song to the water-park's music rotation: Barry Manilow's Copacabana.

I had a feeling I knew where he was at the time.

Sure enough, a few hours later when the music kicked on, the first song had a driving disco beat.

Her name was Lola, she was a showgirl …

The first family to rent one of our Bahari River Cabanas is pictured below. Mike, Debra, and Stephen T. from Marion, Illinois, were kind enough to let us snap a photo of them. Peek inside the cabana and you'll see how large the lockable cabinet is. There's a mini-fridge in the other corner.

Click here for more cabana information, including how to make a reservation.

They were young and they had each other    Who could ask for more?

Working on a new ride for two years or more.

And then it's finally time to ride.

After, of course, the State Ride Inspectors give us their seal of approval.

Really. It's an actual seal.

This is Chris, the Ride Inspector who applied the seal, following a long, thorough inspection. Okay, so now it's time to ride.

Dan has a little trouble containing himself as he describes Mammoth testing in this video:

Mammoth opens Friday, May 11, when both Holiday World & Splashin' Safari are open for the start of our "daily" season.

So, what do you think – are you going to ride Mammoth this season? This afternoon, Nathan got a call that Sparkler's hydraulic system was about to be tested for the very first time.

He took off like a shot with our video and still cameras.

This video shows early testing, so there's no "swinging" just yet, just "lifting."

Can't wait to see Sparkler in all its (old) glory after dark – the light package on this 65-foot vertical swing ride is just gorgeous! 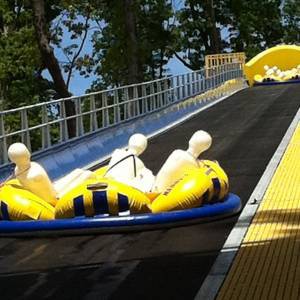 Temperatures up heading up toward 90 this week.

And the dummies are heading up Mammoth’s lift hill. These “dummies” get to ride a bunch of laps before the rest of us do.

Please note: The rather unusual “restraints” are there because the dummies can’t hold themselves on – we humans will hold on tight, plus our center of gravity – ahem! our rumps – will keep us safely in place.

Here’s a dummies-eye-view of Mammoth:

Are you planning to ride the world’s longest water coaster this season?