So what exactly is a “clinker”?

None of these fine gentlemen, of course. They’re pouring the concrete quite carefully so that it’s even and cures properly.

So who’s at the top end of the long chute? Why, it’s Gary! He’s in charge of watching for “clinkers.”

Basically, a clinker is a chunk of already-cured concrete which has clung to one of the fins inside the cement mixer.

As a totally unenlightened female, what comes to mind is my KitchenAid mixer – and how I have to stop it mid-mix to scrape the brownie batter off the beaters. (Oh, and to have a taste as well.)

A clinker can be far more serious than a simple lump in the brownie pan. So if Gary misses one of the cured clumps, he hollers, “Clinker!” to warn the crew below to fish out the clump and toss it in the reject pile.

Okay, so now that we’re talking about brownies, I just have to share my recipe for Voyage Extreme Brownies (they’re every bit as extreme as The Voyage!). This recipe will never be called a clinker – promise! 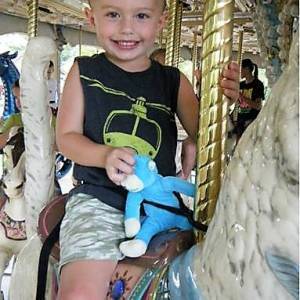 Sure, we work hard, but this is one heck of a fun place to work. It really is like family.

We do want to take a moment, though, to thank Macy, who has been a familiar smiling face around Santa Claus Land and Holiday World for 45 years. She's decided to retire after four and a half decades.

Vanessa and Erin recently presented Macy with a shadow box, filled with memories of her years here at the park, many of them working in our shops. Don't be surprised if you see Macy here at the park this summer though. Sure, she's stepped down from her full-time gig, but that doesn't mean she isn't planning a fun little retirement job.

When you see her, just be sure to say hello and ask her how she's enjoying retirement.

… from a sleet-covered Lewis & Clark car: Update: Congrats to our winner – Tammy L. from Keavy, Kentucky. Her caption was short and sweet – and made us laugh out loud: "For a good time … call 1-812-937-4401." (That's the park's phone number.) Congrats to Tammy, who wins two one-day tickets. Thanks to all who entered!

It's time for another caption contest!

While leafing through Nathan's latest construction photos from Hyena Falls, this one made me laugh.

What in the world is a Sharpie doing in a construction zone? And more importantly – what the heck is he writing?

Judging by the looks on their faces, it's pretty important. Now it's your turn – what's he getting ready to write with that Sharpie? Or, what are they discussing so earnestly?

Make us laugh out loud and you could win two one-day tickets to Holiday World & Splashin' Safari!

2. Must not be an employee of Holiday World & Splashin' Safari (or that employee's immediate family member).

3. Yes, you may enter more than once. Because you're just that witty, right? But five times per person is the limit. Really. And only one caption per posted Comment, please.

4. If you've won tickets from one of our contests within the past six months, you're not elegible to win. If it's been more than six months – have at it!

5. Judges' decision is final. It always is.

How to enter? Post your hilarious caption to the above photo as a "Comment" here on this HoliBlog post (we moderate our Comments, so don't get all worked up when it doesn't show up right away, okay? As long as you don't go all naughty on us, we'll post your caption).

That's our Food & Beverage Director, Jason, in the blue shirt. Today was yet another day of "tastings" for Jason and his F&B management team.

No matter what he specifically asks the vendors (the Men in Black, above) to bring for sampling, they manage to show up with a few surprises. They called it a "Pot Roast Sundae."

Some folks on our Face- book page got a little bit con- fused about this – thinking we had tipped off the edge of the earth at long last.

No, that's most certainly not meat and ice cream. What you see is meat, potatoes and au jus. In a cup.

So perhaps "sundae" is not the best choice of word.

What do you suggest? Pot Roast Parfait? Meat 'n' Potatoes in a Cup?

And, more importantly, does this look delish to you? We'd love to know what you think! Tell me the truth, am I a crusty old thing for telling Jason, "I have absolutely no sympathy for you – take your troubles elsewhere!"?

Thing is, our Foods Director's gripe was about all the taste-testing he has to "endure" this time of the year. Which of our menu items do you miss the most during the off-season?