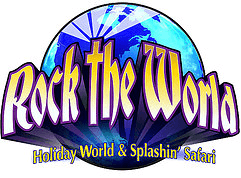 This is the third year for Holiday World’s Christian music fest.  The four main-stage acts will be:

Throughout the day of Rock the World, a series of regional bands will perform in Holiday World. As the park approaches closing time, Rock the World’s main-stage performances will begin for the event attendees.

Rock the World will be held on Saturday, August 23. Information about tickets for the event, including premium-access seating, is available at HolidayWorldRocks.com. Deepest discounts for tickets are available online through May 2.

Holiday World opens for the season on May 3 with the new Mayflower swinging ship ride; both parks will be open daily beginning May 16. For more information, visit the parks’ website at HolidayWorld.com or call 1-877-463-2645.