Well, we finally gave the test dummies the boot – as several members of our staff got to ride The Voyage this afternoon.

A text from Matt, our president: pic.twitter.com/5BO3xteUgl

And whom do we thank for their many frigid hours of winter work to get our Voyage in ship shape? 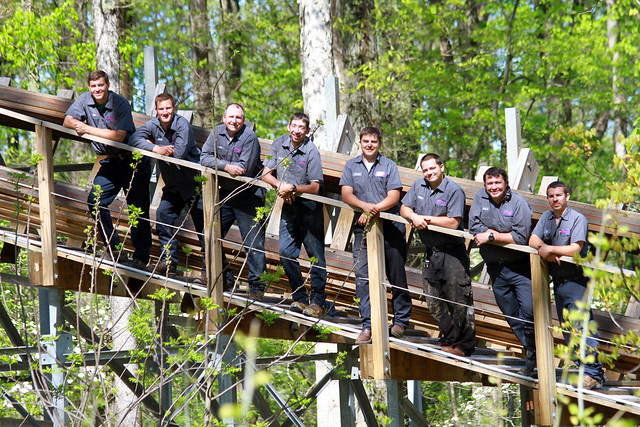 We open for the season on Saturday! We hope you’ll join us – be sure to post here what sort of Voyage you enjoyed during your visit.

Did you ever have one of those days when spellcheck and auto-correct tended to be more humorous than helpful?

Despite the thousands of able-bodied volunteers who contact us from throughout the Midwest each spring, these pale fellows always win out:

And the earliest rides of the season go to … #HoosierDummy pic.twitter.com/RWNTjCIcLR

Because my dad was president, I think a lot of my friends in high school assumed I got special treatment at work, which was not true. If you would like to argue otherwise, please consult my closet filled with blue polos.

Hilariously, when I worked in the bigger departments, my coworkers didn’t really know who I was — which was exactly the way I preferred it; I don’t like drawing unnecessary attention.

A few times in my life, it gave me comical perspective.

For example, at some point in 2011 when I was working double duty in Rides and Public Relations, I got into a conversation with a fellow Rides Host at an employee luncheon.

This luncheon was in the picnic grove, where the sounds of Holidog’s FunTown tend to drift over at a not-so-subtle volume.

If you’ve ever spent time in Holidog’s FunTown, you know that the music is about as ’90s-tastic as it can get, with some more recent Kidz Bop-style music sprinkled in. (And don’t forget the Rugrats Movie soundtrack—does it get any better than Spice Girls’ Geri Halliwell singing “These Boots are Made for Walking”?)

Lauren (my sister) and I picked the music out.

When FunTown was built.

Let that sink in.

Look at this picture. That’s the person who picked the music.

Now, back to this Rides Host. As “MMMBop” started blasting through the sound system (still one of my top 20 songs—don’t judge), the Host commented on how terrible the music was. And how torturous it was to work in FunTown with that music.

… and that he had heard the owner’s children had picked it out.

It must have been five minutes before I responded. I still am not sure I actually said this, but for the sake of preserving the perfect foot-in-mouth situation, let’s say I did.

“Well to be fair, I was eight when my sister and I picked the music out.”

I let him backtrack for a while, but made sure he knew I didn’t take it personally. I wasn’t asked to update it, only pick it. My responsibility finished when I was eight.

I mean, I don’t think everyone can handle the awesomeness that was ’90s pop music. Some people can’t even deal with the boy-band trifecta of the late ’90s: 98 Degrees, *NSYNC, and Backstreet Boys.

For the record, after 15 seasons of fantastic ’90s music, Lauren will be updating the music in Holidog’s FunTown this year.

And as an addendum to that record: I will be fighting to keep “MMMBop.”

Such a pretty sight! 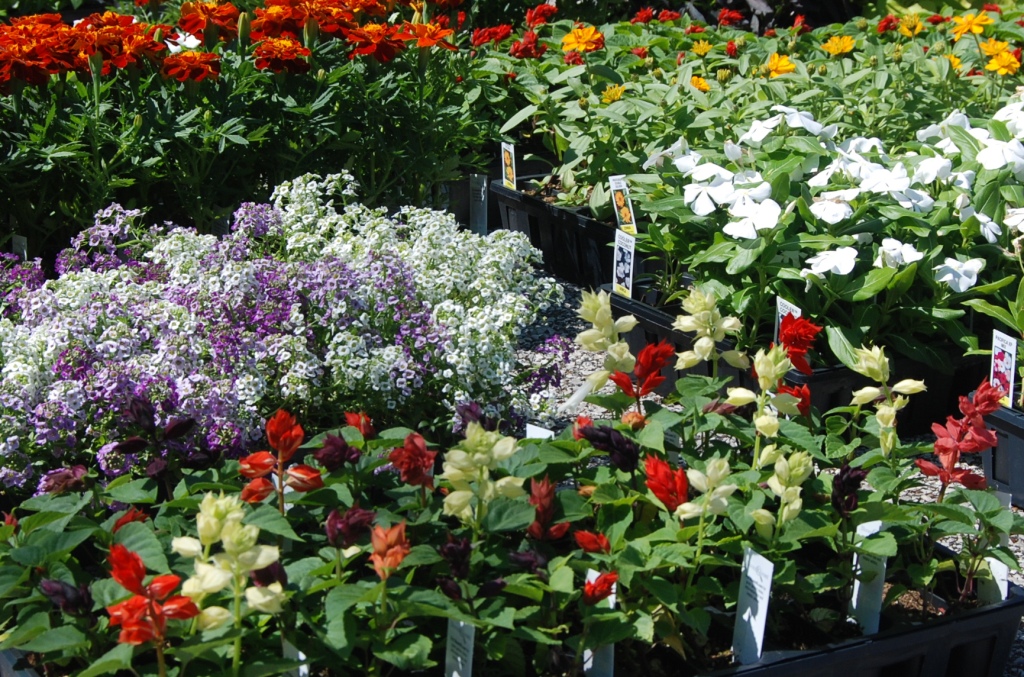 Lovely flowers are popping up this week all over our Christmas section. 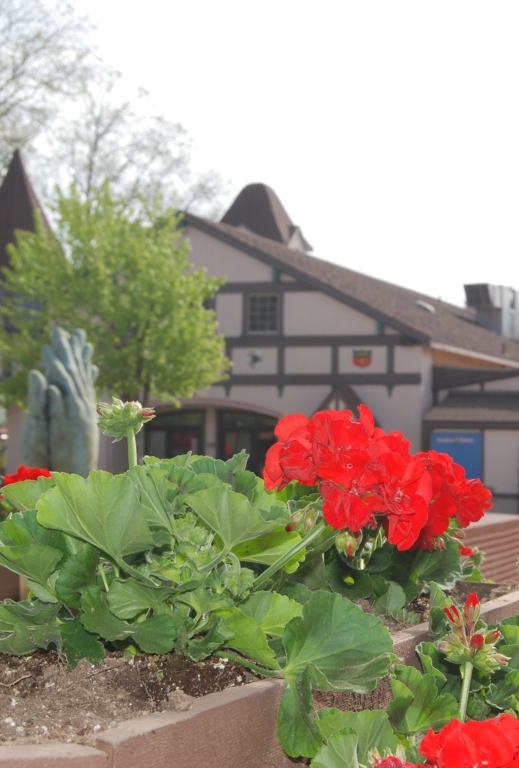 We open in just nine days!

Mayflower is here! What a beauty! pic.twitter.com/zxiulNOyF9

When we told the crane operator, "Take a bow, sir!" … apparently he took us seriously. #Mayflower pic.twitter.com/dCW2DpBk2N

If you’ve been wondering about exactly where Mayflower will dock, here’s a bird’s-eye view from the top of Voyage’s lift hill: 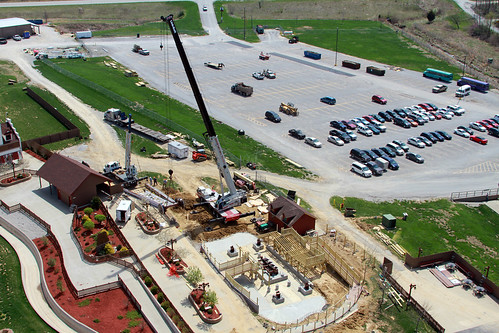 Our new swinging ship ride arrived this week and we wasted no time getting all the pieces secured into place. 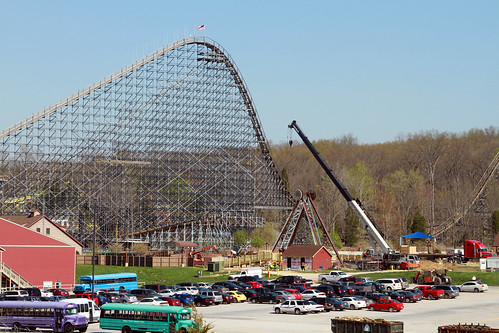 I never would have guessed the medallions would be this big! 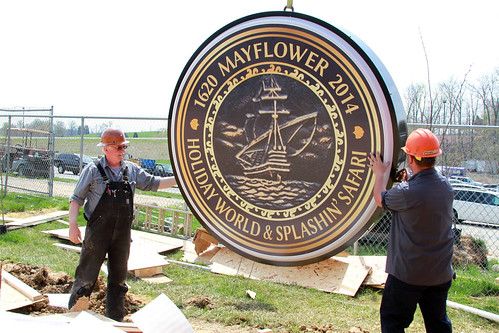 Meet Paul from Chance Rides. He’s making sure all the pieces fit together just right. 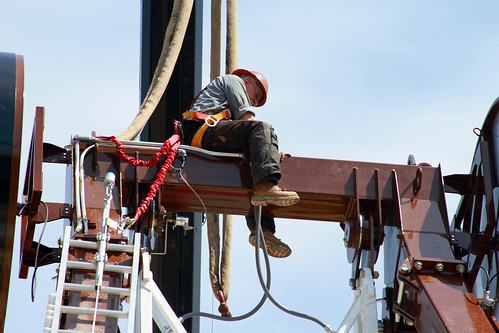 Early this morning, it was finally time to get our ship together. 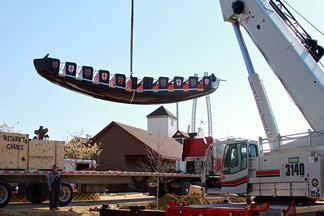 The emblems on either side of the seats? They represent the two flags that flew over the original Mayflower.

It was required by law in 1620 that both the Union flag and the Cross of St. George be flown onboard an English ship. 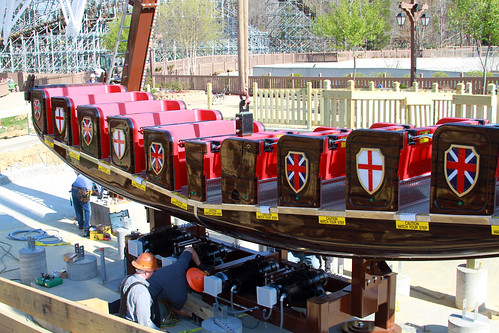 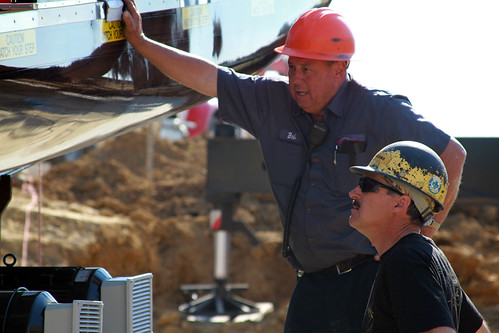 … and an even closer look. 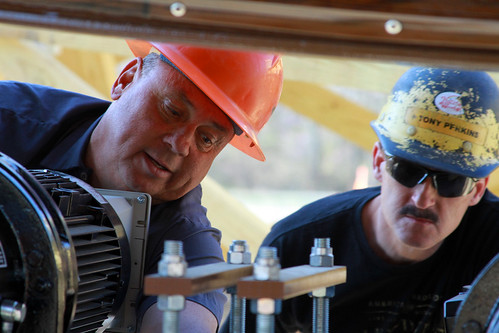 Tony and Paul pause for a confab. 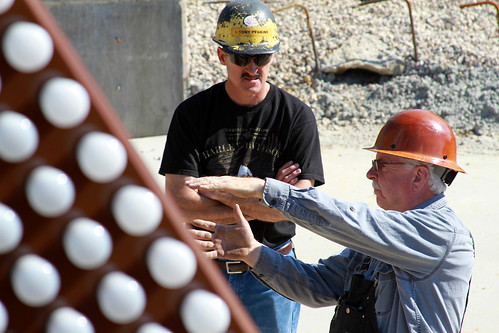 Our shiny new Mayflower will be ready to take on riders on Opening Day, May 3. 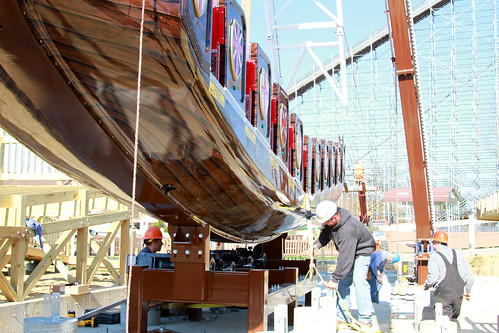 Ready for some action? We caught up with VP James for our fourth episode of the Hard Hat Chronicles:

We hope you’ll join us very soon for a season of blue skies and smooth sailing!

Some dummies get all the fun …