Take a moment with me, and try to think of the most ironic things that could happen to the child of a theme park president.

What if you hated funnel cake or soft pretzels? It’d be a total waste of being born into such a cool circumstance, right?

Now imagine you were afraid of rides. All of the rides.

Except I actually lived that.

My maiden flight on The Raven may have scarred me a bit. I was four (and tall) when The Raven opened, so I was allowed to ride, according to the design engineers. While riding with my dad, I got a bit spooked, and cowered down in my seat. He changed the height limit after that ride, which was okay by me because I had no desire ever to ride anything ever again. (So an apology to those kiddos just shy of the 48 inch mark: Sorry about ruining your chances to ride earlier in life—it’s for your safety.) 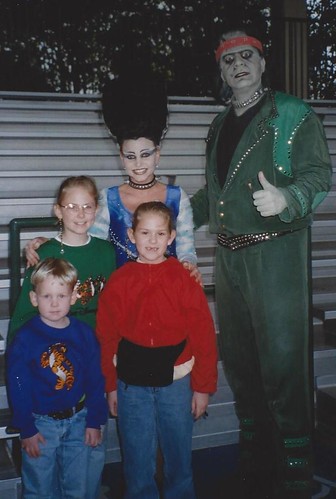 William, Lauren and Leah (rockin’ that fanny pack!) with zombie friends at Islands of Adventure park.

Anyway, I spent probably five years of my life maxing out my time on the kiddie rides (though that time was up too soon for my liking), then playing Skeeball. If I could only convey the amount of money my parents “invested” in my Skeeball career …

Then one life-changing day when I was about six, my parents persuaded me to ride the Tower of Terror at Walt Disney World’s (then) MGM Studios.

With a deep and burning passion.

It took me forever to stop crying.

On the bright side, Mom got me a commemorative Tower of Terror t-shirt as a badge of honor. On the back it said “I suggest you take the stairs.”

I meant every word of that, and told my friends to take the stairs when they went (as though they were all heading over to Florida the very next week).

It wasn’t until somewhere around the age of ten years old that I finally broke my fear.

At Universal’s Islands of Adventure, I rode Ice on (then) Dueling Dragons (which is now part of the Dragon Challenge –I cannot express the joy when my first steel coaster ever was converted to be part of The Wizarding World of Harry Potter—it was only a lifetime dream come true). 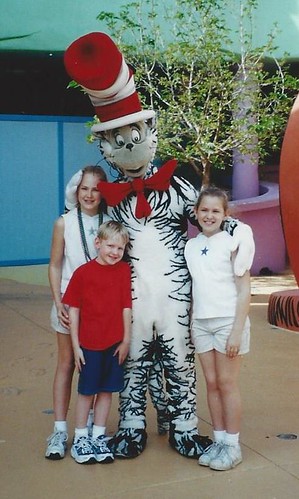 Lauren, William and Leah with the Cat in the Hat. Not a Scaredy Cat in the bunch!

It’s hard to say what changed, but I was so proud of myself for overcoming that fear, and did it riding the outside, which my sister swears is way scarier because you know what’s coming (I thought it was less scary for the same reason).

It was also pretty fun to get to finally ride coasters with my family—and it prepared me for my first ride ever on The Legend with my dad.

So to all you scaredy-cats like me (or parents with scaredy-cat kids), hold on. It could be a bumpy ride getting there, but there’s hope.

Also, if you’re considering riding the Tower of Terror anytime soon, I no longer suggest you take the stairs.

One Response to “Scaredy Cat confidential”