SANTA CLAUS, IND.—–Even though Holiday World’s 2014 season is only a few weeks underway, the park today begins its countdown to 2015.

“As we continue to expand our Thanksgiving section, we look for ways to tie into that theme,” says Matt Eckert, president of Holiday World & Splashin’ Safari. “Knowing the Mayflower was at sea for 66 days gave us the idea to count down the days until we announce our expansion for 2015.” 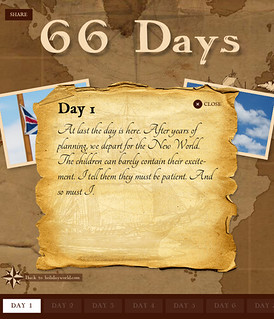 down will take place on a microsite called 66DaysAtSea.com, which is part of Holiday World’s website. Each day, a new journal entry will appear, as a mother on board the Mayflower tells of her family’s voyage to the New World in the year 1620.

The journal will culminate with the park’s announcement, on the 67th day, which will take place on July 24.

“We’re mixing our park’s themes for this announcement,” says Eckert, “as it will fall on ‘Christmas Eve in July.’ Our announcement will coincide with the start of a construction phase that would undoubtedly give away any part of the secret that still existed.”

Speculation has already begun among roller coaster enthusiasts on forums such as CoasterBuzz.com and ThemeParkReview.com, with speculative tweets over the weekend from @Screamscape and @ThemePark Insider.

“I cannot confirm nor deny that this project includes a roller coaster,” says Eckert. “But I can confirm that this is by far the largest expansion project in our seven-decade history.”

The 66DaysAtSea.com microsite was created by the Louisville web design company DBS Interactive. Work on a second microsite is underway; it will appear following the July 24 announcement.