When I heard my toddler grandson “answering” the phone this morning in the next room, I grinned. Then I looked to see what household item served as his toy phone this time. Two-year-old Cameron has been known to “answer” a calculator, empty cup, and TV remote control.

This time it was his shoe!

I couldn’t wait to call my 84-year-old dad in Connecticut. He would be thrilled to know his great-grandson was another Maxwell Smart in the making.

And so when I got to work and was summoned to a meeting to bring Lauren R. into the “cone of silence” about our 2015 expansion, I knew it was a really good day.

And what exactly is the Cone of Silence? If you’ve never watched reruns of the old Get Smart TV series from the 1960s, here’s a meme: 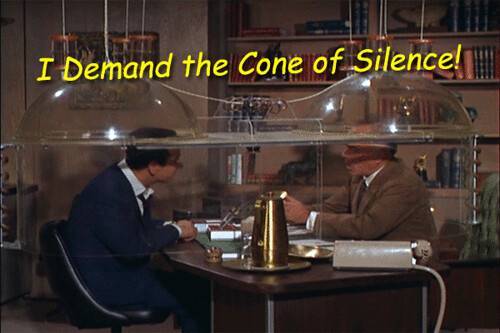 Whenever “Chief” had sensitive information to pass on to Max, Agent 86 (as he was also called) would demand the Cone of Silence. It would descend noisily from the ceiling and – go figure – echo to the point that the secret-keepers were forced to yell to each other to be heard.

One hopes that half a century later we’re in better shape technologically. Will Koch was a big Get Smart fan and started the “cone of silence” routine around here about a dozen years ago.

After the first time he brought me into the cone of silence, I sent him a “cone” photo I’d found online. It remained as his desktop wallpaper for years.

And so, in that grand tradition, we brought Lauren from our Communications Department into the “cone” this afternoon.

She didn’t know I was snapping photos of her reaction – and was kind enough to grant me permission to tweet one of them:

Our cone for 2015 isn’t exactly crowded yet

This is a true need-to-know situation as we count down our 66 Days at Sea to July 24.

By the way, don’t even try to get the facts out of us. We’ve all been threatened that if we breathe a word about next year, we’ll have to trade in our cells for shoe phones!

2 Responses to “Get smarter”