I woke up this morning nervous. It was kind of a combination of day-of-final-exams anxiety and Christmas morning excitement.

Announcement Day is [almost] here, and we can [almost] stop talking in hushed tones everywhere we go.

But I know that one more day for us means one more day of agony for the Holiday World lovers of the world. So, I’ve decided to be one of those “cool parents” who lets their kids open just a present or two before Christmas.

I’m giving you clues. More than ever. All in one post.

I asked every member of our executive management team to provide a clue (as well as some of my family members).

I had kind of been thinking one-or-two-sentence clues, but Matt would provide a short story instead of a few sentences.

President Matt says, “Master Planning is one of the super cool things about our job. Looking into the future and deciding what our Guests really want and actually delivering that makes our day. We have done that year after year. We also love to get suggestions from our folks here at Holiday World & Splashin’ Safari. For example, Paula Werne, our Director of Communications, for years wanted an attraction that we could name the Wildebeest. That was delivered in 2010. [Paula’s triumphant note: I wore ’em down!] Our Guests have long been asking for a Swinging Ship in Thanksgiving. The Mayflower set sail here in 2014. Eric Snow, our Vice President of Marketing is practically begging for a Birds of Prey show. Yeah, not happening. I think this year’s delivery will make him forget about his request.”

VP of Support Services Alison Montee says, “Bellyaching and moaning won’t get you any closer to announcement time” in her own inimitable style.

VP of Operations Chris Kearsing provided this nugget: “My clue was in the title. Try misspelling Bastille.”

Assistant VP of Operations (and former water park director) Lori Gogel told me to tell you that this will be, “One mammoth of an announcement.”

VP of Project Management James Olliver says, “I’ll get you a clue as soon as I finish up these 22 million other tasks on my list.”

My brother William says, “I always wanted a younger brother.” 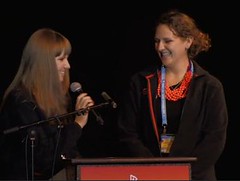 Lauren, my sister, provided this gem: “They usually keep me in the loop for this sort of thing … guess I need to catch up on reading my emails.”

My mom, Lori, added, “I’m too busy mocking the birds of prey show to think of a clue.”

Please join us (or tune in to stream the announcement) shortly after 8:00pm Thursday for all the fun. After all, it’ll be Christmas Eve in July!