Home // HoliBlog // The Legend of the Thunderbird

The Legend of the Thunderbird

After the most amazing new-ride announcement we could have asked for, some people are a bit confused. They like the fact that we’re getting a steel coaster, but they don’t get how Thunderbird belongs in Holiday World. Especially in our Thanksgiving section.

The Voyage is easily the best name. It’s simple. It tells a story in a word.

But that name was already taken.

So we had to start getting creative. Really creative.

When I first heard the name Thunderbird, like some others, I cringed a bit. I didn’t see the fit.

Did you know that there have been sightings of the mysterious bird as recently as last October in Iowa? There apparently was a picture of one, stretched on a barn door in the 1960s, but no one can locate it.

We now embrace the name. We call Thunderbird the “Sasquatch of the Sky.” (Another fun fact: my dad loved my mom’s Toyota Sequoia because he thought it was such a powerful name. “Kinda like Sasquatch,” he used to say. He always wanted an SUV named Sasquatch, but I think he’d like this secretive little tribute as well.)

According to legend, Thunderbird has a wingspan of approximately 20 feet. The bird flaps its wings to create thunder and shoots lightning out of its eyes.

Paula already knew that the Pilgrims had endured terrible storms at the end of their journey, and we began to wonder.

What if the Thunderbird, after hundreds of years in hiding, came to Holiday World? 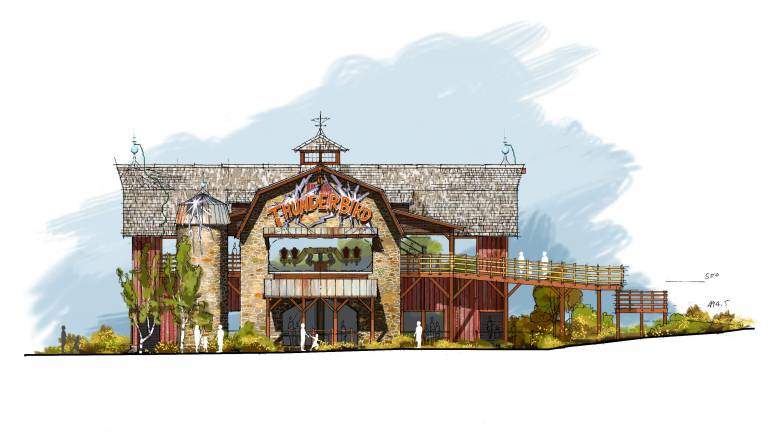 Why will you be in a barn that looks nothing like what the Pilgrims would have built? (Other than the fact that we wanted a beautiful station building and that architecture at the time was simple—even at its fanciest?)

The Thunderbird eventually found his way to southern Indiana, mystically connected with the 66 Days At Sea journal that had been lovingly preserved for centuries by the descendents of the Pilgrim mother who had kept daily account of her experience on board the Mayflower. One descendent, a farmer, was fascinated by Thunderbird’s power and grace and tried to harness him. But as you can see by the scorch marks and the holes in the barn, this majestic creature cannot be tamed.

We inherited the farmer’s barn and property, and only recently discovered a wooden box buried near The Voyage. It seems our farmer chose not to pass along the journal to the next generation in the hope of sparing his descendents the challenge of sharing the land with the unbridled energy of the Thunderbird. When we opened the wooden box and found the journal, we now realize we unleashed the powerful creature to rule the skies once again. Thunderbird nests in the barn and in our woods.

He is home here.

We’ll ride our new coaster on the wings of the Thunderbird, because he is now more familiar with humans and is willing to show us a glimpse into its world.

He will take you on an amazing journey. (Fascinating fact: According to legend, the Thunderbird was warned not to fly too close to the trees, as he would fly so fast, he wouldn’t be able to stop in time to avoid them. We’ll make sure that doesn’t happen!)

We hope you’ll come to love Thunderbird as much as we do.

9 Responses to “The Legend of the Thunderbird”