SANTA CLAUS, IND—Joining the wave of fund-raising for ALS research, today the full-time staff of Holiday World & Splashin’ Safari was drenched with ice and cold water after issuing a challenge to four other parks.

“I was challenged personally on Facebook last week,” says Leah Koch, a fourth-generation owner and park director. “When I challenged our staff, we just had to gather under our 1,200-gallon bucket at Kima Bay!” 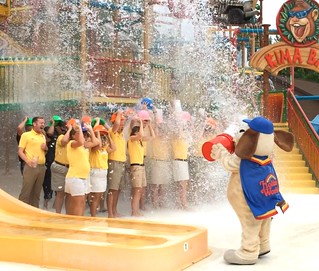 The park’s staff stood under the massive tipping bucket and added their own buckets and hard hats full of ice to the mix, after issuing their ice bucket-challenge to Kings Island, Dollywood, Six Flags St. Louis and Silver Dollar City.

As of yesterday, the ALS Association reported more than $13 million has been raised by groups and individuals accepting the ice bucket challenge. Holiday World’s donations will be three-fold, with donations by the staff, a park donation, plus a donation by the Koch family.

Amyotrophic lateral sclerosis (ALS), often referred to as “Lou Gehrig’s Disease,” is a progressive neurodegenerative disease that affects nerve cells in the brain and the spinal cord. As many as 30,000 Americans are faced with the disease at any one time. To learn more and make a donation, go to ALSA.org.