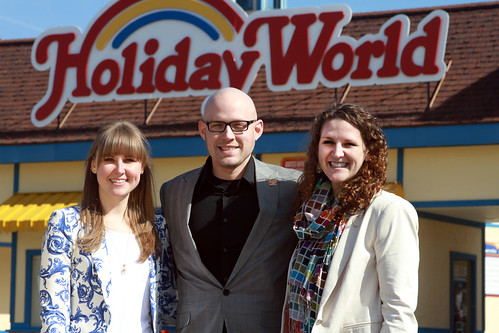 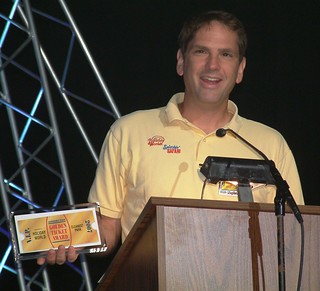 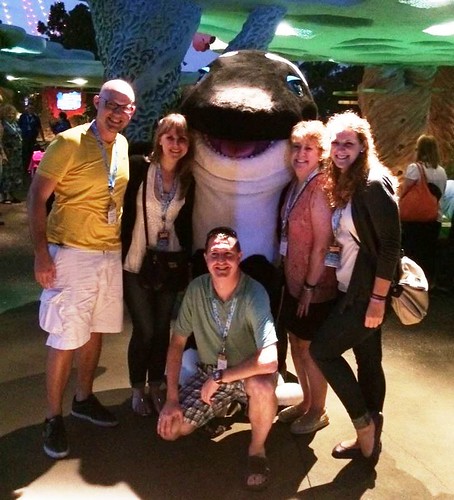 Because there really is someone named The Hungry Cowboy.

And he visited us.

And he made a video:

The Hungry Cowboy visited us, ate his fill, and made this video: http://t.co/nezrM02Fpw @ericneznik #TurkeyDinnerBecauseIEarnedIt

And now he wants to come back.

@HolidayWorld Thanks for sharing! If I lived closer I'd come back for Halloween! Pumpkin funnel cakes?! Delicious!

Come on now, Cowboy – Texas ain’t all that far from Indiana …

A lovely monarch butterfly lights momentarily on the nose of our Kitty Claws straw bale.

So how is Thunderbird construction coming along? 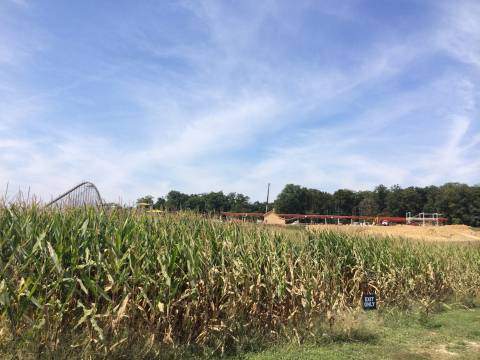 In this episode of the Hard Hat Chronicles, James takes us into the woods and explains one big commonality Thunderbird will have with its Holiday World siblings.

Do you have any questions for James to consider answering in an upcoming episodes? Please post them here and maybe he’ll give you a shout-out in the coming weeks and months.

So how did we do this year?

Leah and Lauren accepted the award:

And for Cleanest Park? Fifteen years in a row:

"When it comes to Cleanliness, we are borderline obsessive." – Matt Eckert, pres. #Cleanest15Years pic.twitter.com/wWjQMvfuFq

Thanks to our wonderful Hosts & Hostesses for keepin’ it clean – all day, every day!

You know … the Academy Awards of the theme park industry?

(Can’t continue without a quick and sincere #RIPJoanRivers shout out.)

Our team is ready to “Bring Home the Lucite,” as Will Koch used to love to say.

Would you like to watch? The host park customarily streams the event live. Tonight’s West Coast ceremony begins at 9:30pm CDT.

It’s been a little more than a month since our announcement for 2015, and I’m still in shock that we managed to keep this massive project under wraps. And I’m even more in shock that our fans just loved that we kept the secret.

Frankly, we were all braced for people to discover it two days out.

We decided if that happened, it would be okay. After all, we still had an awesome teaser video to reveal.

Two days out, though, a message popped up in Paula’s Facebook inbox: Someone had found our trademark application. He admitted it took him a long time to find. But he found it.

The jig was up.

Then he added something we didn’t expect: He didn’t want to spoil the secret. He just wanted to let us know he had uncovered it.

So when Announcement Day came, and almost everybody was still in the dark, we were bewildered, but proud. It was wonderful to see the fruits of our undercover labor pay off so well.

Now that everyone knows, they still can’t believe how we kept this secret.

So I thought I’d explain the many steps we took to keep the Thunderbird under the cover of night:

The Cone of Silence

We kept the secret on a need-to-know basis. And when the need to know came, we literally told each individual they were being brought “into the cone.”

I kind of wish I was kidding.

As a group, our full-time staff didn’t know until the morning of the announcement. Our seasonal employees found out along with the general public (with the exception of a select few in Warehouse who innocently opened a box of Thunderbird key chains, and then got a free lecture about keeping quiet).

We took no chances.

The workers on the construction site only knew their individual piece of the puzzle (meaning the folks pouring concrete knew where to pour concrete and how much, but did not know what was happening above those footers). 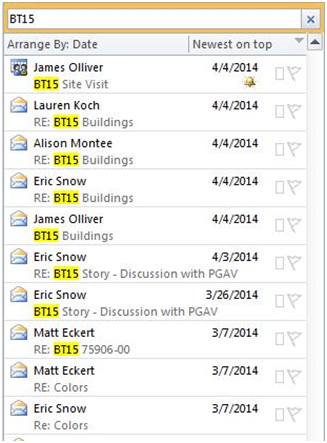 This is what my inbox looked like for several months.

Nobody spoke the word Thunderbird out loud, except in hushed tones – and rarely – behind closed doors.

We did discuss in slightly less-hushed tones “Big Turkey” or “BT” or “BT-15” (Big Turkey was our placeholder name before we landed on Thunderbird).

This included contractors. VP James made it very clear that they were never to use the real name or ride type, only BT or BT-15.

Even the launch room became the lunch room (which became the jerky room – if you want to understand that jump, ask James).

We knew from experience (and watching other parks) that roller coaster enthusiasts would search for our trademark application. We considered applying for three or four different names, so no one would be quite sure which name would prevail. Ultimately, we decided that we needed to apply for the trademark under another company. Thus Croatan LLC was born in my name, with the address of our trademark lawyer’s office in Evansville (if you want to understand why I chose Croatan, look up the story of the lost colony of Roanoke—it’s fascinating). Croatan LLC almost flew under the radar (get it?).

Of course, now that I’ve shared this, we’ll have to be even sneakier next time.

Every box, every document, every label, every scrap of paper with those letters was shredded, hidden, and burned (not really) by VP James. He actually filled his car’s trunk with labels from the boxes when our anchor bolts arrived. He also stripped our documents of any trace of those two letters before submitting anything for permits.

I’m pretty sure his job became a lot easier on July 25. 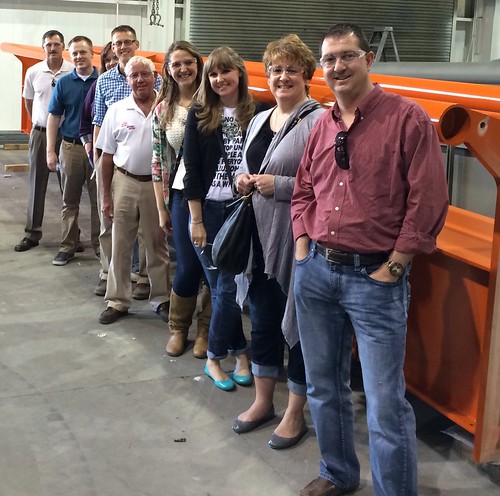 We got to visit Clermont Steel in Cincinnati to see our coaster being manufactured. They have their own system of coding, just in case some coaster enthusiasts wanted to go sneaking around after hours.

Clermont and B&M were great about keeping the secret. 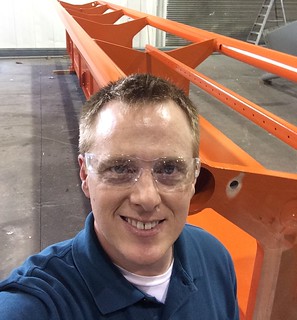 Since we had pushed manufacturing up ahead of schedule, they ran out of room to store our steel, but they were very respectful of our secret and made do until we made our announcement.

On our visit back in May, VP Eric took tons of pictures, which he promptly put in a Dropbox folder which he shared with us, and immediately deleted from his phone. 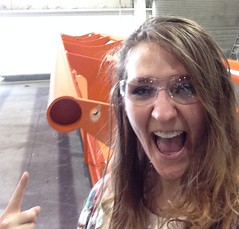 I, on the other hand, took a few photos and set a code on my phone (which I never do) just in case it fell into the wrong hands.

VP James even took a selfie with another park’s coaster—next to the lift hill piece of course—just to cover his tracks (ha—get it?).

Immediately following the announcement (well, after the congratulations and interviews were over), I posted my coaster selfie and another track photo on my Facebook page. I was so excited to post at last!

Now that all is said and done, I hope I can soon start saying “Thunderbird” out loud without experiencing a small anxiety attack.