Thunderbird’s highest track is in place

SANTA CLAUS, IND. — The nation’s first launched wing coaster hits a milestone today, as the highest piece of track is lifted into place by a 165-foot-tall crane. 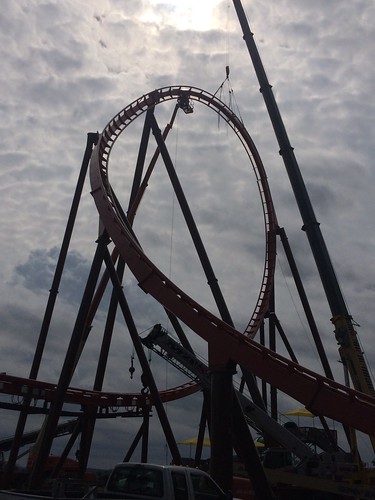 Thunderbird, Holiday World’s $22 million steel roller coaster, does not have a standard lift hill, but instead will launch winged trains full of riders into a 140-foot-tall loop, accelerating from zero to 60 miles per hour in just 3.5 seconds.

The top piece of the loop, which weighs nearly nine tons, encloses the first of Thunderbird’s four inversions. This, the highest loop, is called an Immelmann, named for a “half-loop, half-roll” aircraft maneuver created by German pilot Max Immelmann a century ago.

In addition to Thunderbird’s 14-story Immelmann loop, the launched wing coaster will also feature a zero-G roll, barrel roll, and a loop soaring 125 feet in the air.

Continuing Holiday World’s tradition of sending roller coasters through its thickly wooded and hilly terrain, Thunderbird will at first soar and loop high in the air and then hug the ground, surprising riders with rapid-fire “near misses” such as keyholes, themed elements, other rides, trees, and even the ground.