Have you ever wondered what it takes to put together an episode of reality TV?

Not the table-throwing, wine-tossing kind of reality show … a nice, fun travel show.

There’s a new series on the Great American Country (GAC) channel called “All-American Amusement Parks.” Actually, when we first heard from the production company, they used the working title of “United States of Amusement,”but changed it a few months later.

Good call, GAC. As someone who grew up with a surname starting with the letter “V” (and ultimately married a “W”), I have a huge appreciation for one’s ultimate place in this world of alphabetical listings. 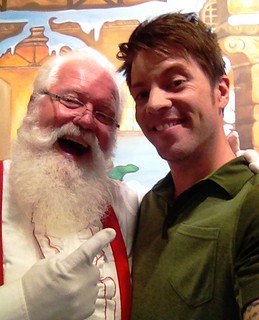 He’s also the oldest of the three Scott brothers. If your heart races a little bit faster upon learning this, it’s probably a safe bet you’re a fan of HGTV’s “Property Brothers” and “Brother vs. Brother.”

All I know is, this handsome young man turned into a grinning little boy when he met The Man in Red.

The premise of “All-American Amusement Parks” is that J.D. finds a “super fan” for each park he visits. This fan, who has a “special connection” with that park, accompanies J.D. for a day, showing him around and making sure he takes in that fan’s favorite rides.

When the production company reached out to find that special Holiday World fan via our Facebook page, the response was swift, enthusiastic, and nearly overwhelming.

After sifting through the blizzard of emails, producers selected a family from Lexington, Kentucky. 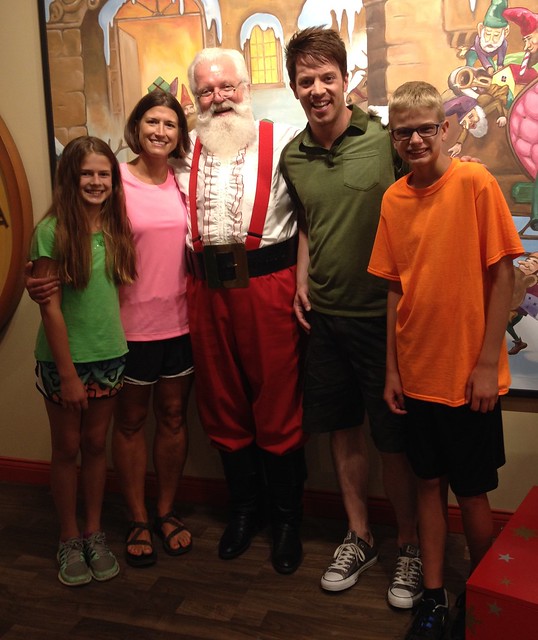 Meet Gwen, along with two of her children: Justin, 13, and Claire, 12. (Dad and younger brother Jack cheered them on.) Gwen’s special connection is that she grew up locally (she’s a Heritage Hills High School and Indiana State grad) and worked at the park as a teenager. Even though she now lives a few hours away, this is still her favorite place to play with her family.

Gwen, Justin and Claire hit it off with J.D. right away. First stop was HallowSwings and then a visit with Santa in Mrs. Klaus’ Kitchen.

They shot a rather lengthy scene in front of The Voyage, as they talked through plans for the rest of their day at Holiday World.

Here’s a factoid for you: the production crew totaled 14. We’ve hosted a lot of national media over the years and this was the first time the crew numbered in the double digits! (J.D. even had a hair and clothing assistant. I didn’t see any makeup in her Mary Poppins carpet bag, so I won’t make any cracks – as tempting as it is.) 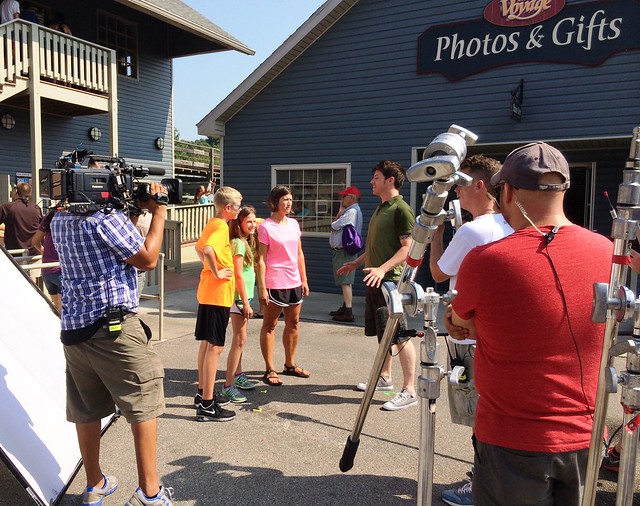 And yes, they got to ride Voyage. In the front seat.

J.D. even proclaimed it to be his #1 wooden coaster. That’s saying something, given that he spent the entire summer visiting parks all over the country. 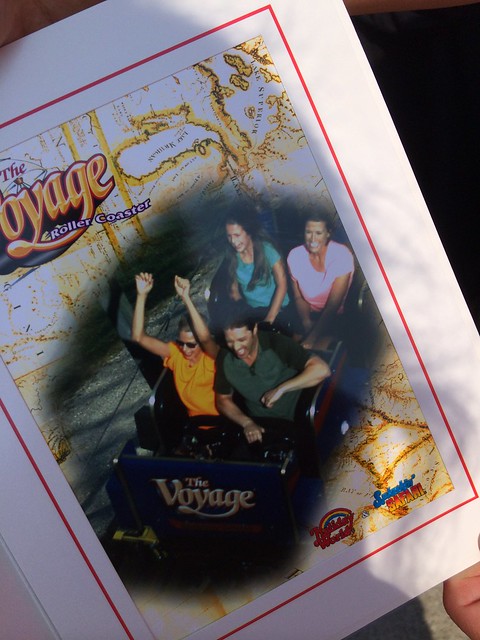 Souvenir on-ride photo from The Voyage

Fast-forward three months, and the “Themed Parks” episode of “All-American Amusement Parks” is in the can (that’s Hollywood talk) and ready to air this coming Thursday evening (7pm CT and 8pm ET) and again on Friday and once more on Saturday. Remember this is cable/satellite. Here’s the link to the schedule. 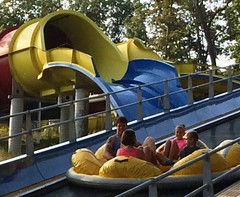 Since tonight’s forecast is calling for frost on the pumpkins – somewhat reminiscent of the Ice Age for those of us still wearing khaki shorts to work, let’s finish this post with a photo of J.D. et al’s ride on our Mammoth, the world’s longest water coaster.

The shoot was on a hot, humid day in early August and it was a very long production day (we started a few hours before the park opened for the day). But somehow our stalwart cast managed to ride Mammoth over and over and over again. Just to make sure they got it right.

We hope you enjoy the show on Thursday!

One Response to “Great Scott! Tune in Thursday night”