When asked to carve a pumpkin this week, I was borderline inappropriately excited. It’s probably been ten years since my last pumpkin-carving, which is far too long.

Pumpkins carved by Will Koch

There’s nothing like carving a pumpkin to get you in the Halloween spirit. (This is coming from a girl who just spent the last six weekends dressing up in full costume and makeup to be a ghost)

And when I found out I was going to be carving my sister coaster’s logo, I was especially pumped.

As we gathered to begin carving, Lauren and I started on a trip down memory lane. Especially when Paula mentioned that Halloween used to be her most nervous time of the year … because of my father. 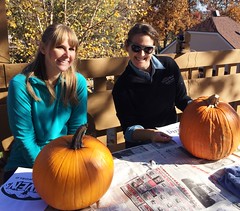 Lauren and Leah, ready to carve

Dad had an unfortunate habit of cutting himself at some point in the carving process. Generally during the cutting-the-pumpkin-top phase (rarely while carving intricate designs).

Band-aids were just part of his fall “look.”

He even had to get stitches a few times.

Bottom line, though, Dad had a knack for carving one heck of a pumpkin.

As children, we used to pick out the stencils for him to carve. And we totally picked out the hardest ones we could find, just to see if he could do it.

He’d accept the challenge and we’d all get to work. My siblings and I worked on very simple ones (though as I got older I started to try my hand at the more advanced ones — and wasn’t half bad, if I do say so myself).

So, when we arrived to carve our pumpkins earlier this week, I had high hopes of honoring my father’s proud tradition.

Instead I was met with a challenge far beyond my skill set. (Seriously! Look at The Legend‘s logo! It’s got those tiny branches that didn’t happen, all kinds of squiggly letters, and the world’s tiniest jack-o-lantern head!)

Additionally, I’m really bad at anything crafty. Like Pinterest “Nailed It” bad. It’s just not my thing. Dancing? Photography? Playing instruments? Sure! Ask me to paint a picture, though, and I will simply laugh. The only way there will ever be a canvas filled with something beautiful of my own creation is if it’s a photo (and if it’s beautiful, it was probably sheer dumb luck). 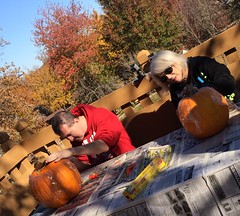 So I walked into our carving session with Lauren and Barbie (both of whom are craft warriors), knowing that even though there was no judging, The Legend pumpkin would be the loser.

… which was especially difficult because I’m ridiculously competitive (a trait I got from my father).

Luckily, Matt did all the trash talking and I went about my carving which in the end received rave reviews such as:

“It could have been worse!” Lauren Koch Crosby, Sister, Director of Theming, Pumpkin Carving Critic

“It’s not as bad as you think!” Ashley Satterfield, Special Events Manager 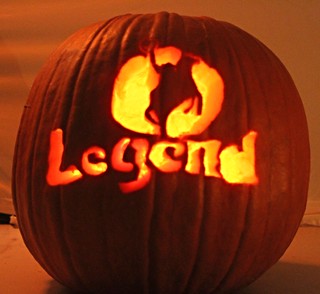 So tonight I may consider one more pumpkin-carving mission.

But it won’t be another Legend logo.

… and why do I get the feeling this will now be criteria for all new logo designs here at the park: Yes, but is it carvable on a pumpkin?

3 Responses to “Carved for attention”