Did you know you can purchase your 2015 Season Passes for $20 a month using our Easy Pay Plan? This offer runs through November 15, 2014.

And as a special incentive, we have two perks for you if you get your 2015 Season Passes processed here at the park during this year’s Happy Halloween Weekends.

We’ll let Holidog fill you in on all the details:

Not everyone considers pun-making to be an art form, but a little Halloween humor makes us smile.

Please post a comment below if you caught the second pun. I won’t say it’s been keeping me up nights wondering, but …

From before the sun was up this morning, we were all grabbing our phones to check the weather apps.

I even bugged our morning weathermen:

But the #WeatherPermitting phrase continued to haunt us.

Reporters called one after another: Are you still planning to do this?

I dashed between the raindrops to capture this photo. Then the sensible voice in my head out-shouted the excited voice and proclaimed: That 140-foot-tall track is one heck of a lightning rod!

The storm was intense, but didn’t last long.

And then it was time. Swing that beautiful track!

… and the second half of the video:

And the clouds separate for the sun to shine on our Thunderbird. #OrangeIsTheNewTrack pic.twitter.com/463tLyRpL1

We’ll have a new Hard Hat Chronicles to post later today, with lots of footage from the topping.

Thanks to our hard-working Thunderbird Construction teams for making it all look so easy.

Been using this hashtag a lot today: #WeatherPermitting

That said, we’re excited about what tomorrow may bring:

We won’t know for sure until tomorrow morning, but a big ol’ piece of track (weighing nearly nine tons) is expected to “top off” Thunderbird’s highest point.

If you can’t watch live on our ThunderbirdCam, please check back here and on our social media later in the day for updates.

Considering that the topping will put into place Track Piece #21 (out of 77), we’re feeling rather lucky that we’ll get to lift it into place on October 7.

When you visit us for Happy Halloween Weekends, be sure to include our Halloween Magic Show on your don’t-miss-it list. 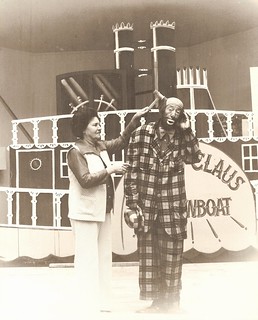 Don Baggett’s magic skills extend far beyond sleight of hand. He has the gift of extracting giggly, irrepressible laughter from youngsters.

You know, that kind of laughter that would be called raucous if it came from adults.

But we’re usually too dignified to erupt with that much unbridled glee.

Earlier this year, I asked Don when the magic bug bit him and was touched by his reply:

The very first magic show I ever saw as a child was at Santa Claus Land (now Holiday World).

I remember sitting there watching the show several times that day, wanting to know and do the magic that was being performed for me. I also knew that someday I, too, wanted to perform on a stage at Holiday World.

My love for magic and Holiday World have always gone hand in hand.

Here’s a small sampling of Don’s magic and the wonderful laughter that always accompanies it:

Don sent us some tips for young magicians; please check them out over on our Halloween Magic Show page.

Thanks to everyone who entered our Happy Halloween Weekends Sweepstakes! Our winners were chosen at random from thousands of entries. 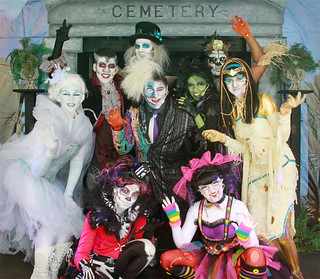 So just how Halloween are you?

By that I mean, do you decorate?

Do you carve a pumpkin (and roast the seeds)?

What about costumes – do you have a favorite memory of making your own?

Let’s celebrate the start of October with a sweepstakes! Three lucky winners (chosen at random) will receive two one-day tickets to this year’s Happy Halloween Weekends.

Graveyard Smash is back and so is Holidog’s 3D Halloween Adventure. Our 12-acre corn maze is Thunderbird-themed this year. And we still have hayrides, pumpkin funnel cakes, and a fun area for smaller children to play and trick-or-treat.

Oh, and rides. Coaster rides after dark? Every Saturday night through October 26!

And what’s new for Happy Halloween Weekends this year? Something that may startle and will definitely amaze. Carnival Chaos, as our barker will tell you, is not for the faint of heart!

Okay, then. Let’s get you registered for our sweepstakes.

How to enter? Let’s start with a few necessaries:

Ready to enter? Of course you are. Simply enter our sweepstakes here from a mobile device; or if you’re using an immobile device, enter by using the widget, below. And not just today – enter daily through Thursday, October 9, 2014 at 11am CDT.

Because, you know, just about everybody is wanting to see the latest construction pics of Thunderbird. 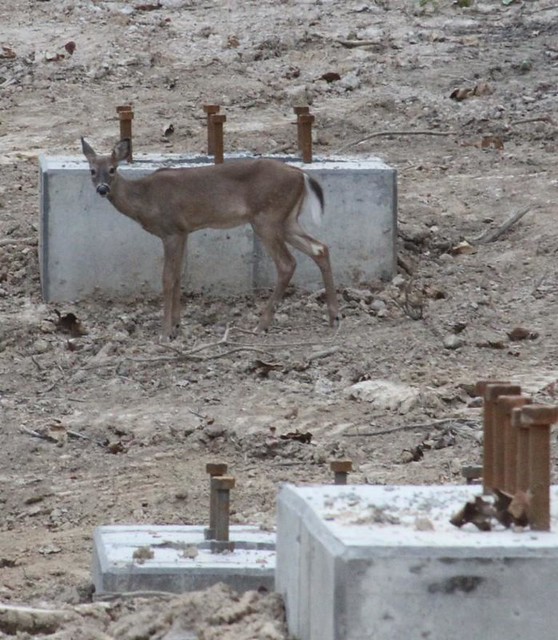 I half expected that a coaster enthusiast (you know who you are!) might have strapped a video cam on Dasher there and sent him in for a DashCam exclusive. 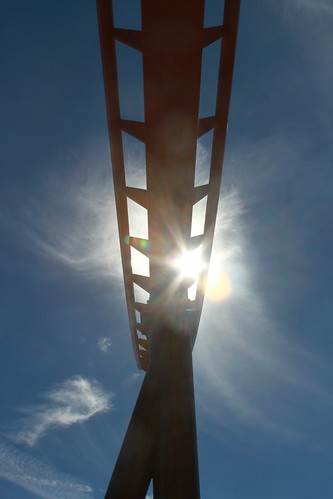 We had some fun recently with this trompe l’oeil on Twitter:

And today we posted a brief construction video on our Facebook page:

But right now it’s time for a history lesson.

It’s about the launch into Thunderbird’s first loop. 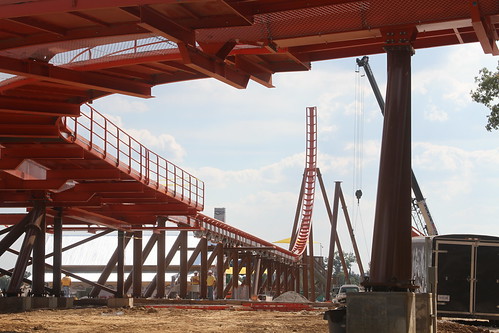 When I was first included in those top-secret meetings (aka the Cone of Silence) late last year, those in the know kept listing the elements of BT-15.

Including the Entenmann’s loop.

Remember, I grew up on the East Coast – and to me, Entenmann’s means crumbly, cinnamonny coffee cake.

After about the third meeting I similarly interrupted, a quick lesson in military history got me straightened out.

Thunderbird’s first loop is named for Max Immelmann, a German pilot. A World War 1 flying ace, actually. He is said to have invented this half-loop, half-roll maneuver.

And that is why this first inversion is called an Immelmann. It’s a half-loop, half-roll. No coffee cake involved (although I’d venture to say he enjoyed a good piece of apple strudel more than once).

From Thunderbird’s launch, we’ll fly into our Immelmann. 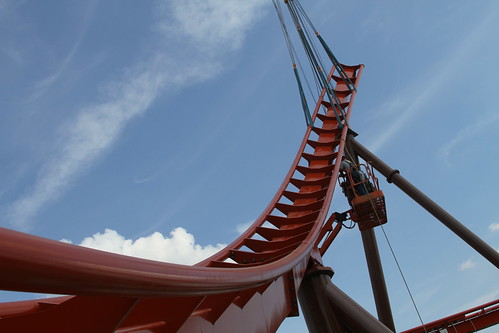 The top of the Immelmann is 14 stories up.

From there, the track rolls over toward The Voyage.

The photo below shows where the end piece of the Immelmann loop will connect. 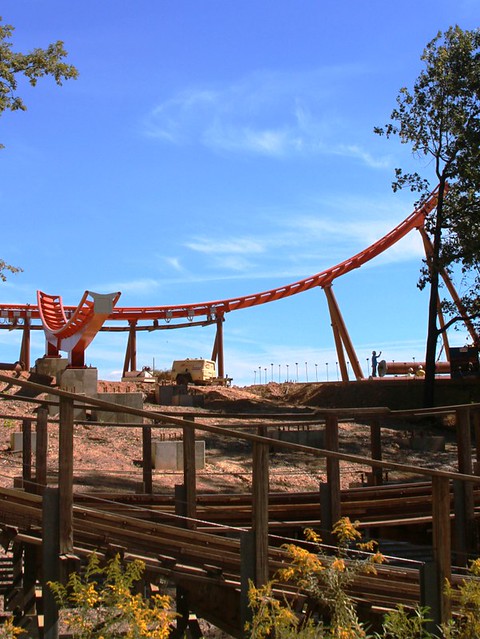 Topping a roller coaster is a really big deal.

So what will we do when we get there (sometime next week, we think)? Have a celebration of course!

To start the celebration, we’ve moved the SplashCam and renamed it the ThunderbirdCam. It’s located along the Snowy White Gravel Road and is interactive.

Views you can choose. (Surely I’m not the first to come up with that phrase.) Have fun playing with this new toy.

Lauren R. took this view because to her it looked like the track pieces were forming one of our HoliSmiles. 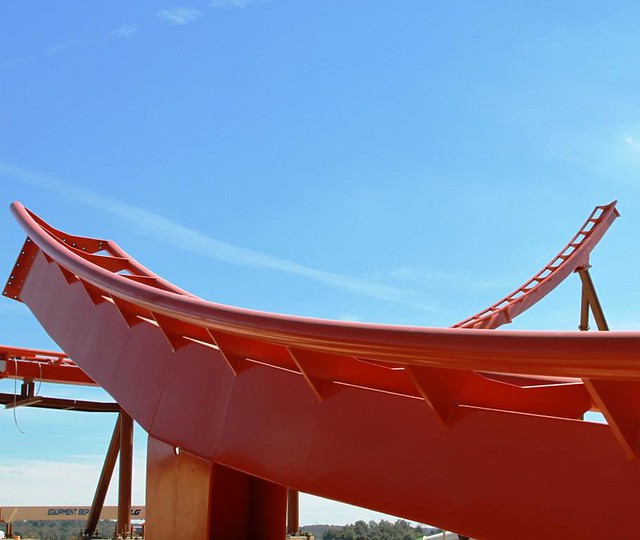 We’ve got room for one last Thunderbird photo in this post, with promises of many more to come. 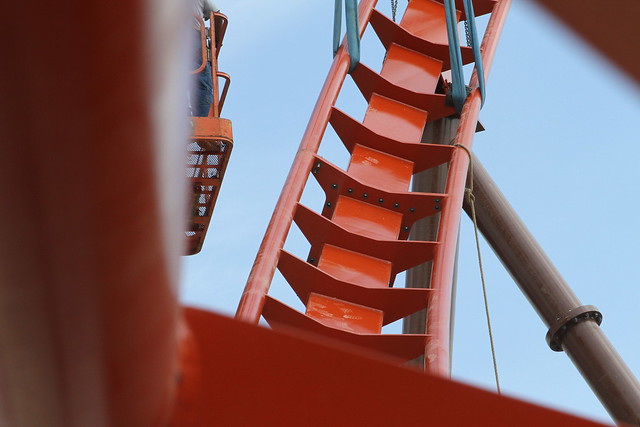 Thunderbird’s track count is 17 out of 77 as of today.