Family is what it’s all about.

No one’s going to argue with that statement, right? Whether we look toward the older generation or the little ones just getting started, there’s nothing like the memories we have of our moments together.

And so I tell you this story as a happy grandma.

My little grandson is named Cameron. He was born on April Fools Day, which is so fitting considering how holiday-centric we tend to be around here.

Since very early on, he’s been a talker. Non-stop. Thing is, we grownups just weren’t sophisticated enough to understand his rapid-fire patter.

For months, his language seemed oddly familiar. I finally figured it out one day. 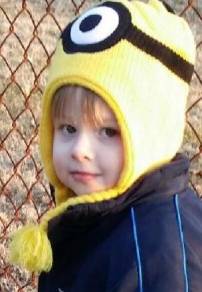 I announced to my husband,

That little fellow has regaled us with many stories and opinions.

No doubt there were a few orders along the way, too.

Cameron knows his letters and his numbers. He knows the Swahili song at the start of the Lion King movie. But for the most part, he prefers to speak his native tongue: Minion.

The cadence of Cameron’s voice as he chatters away always gives us the feeling that we’re missing a really good tale.

That boy’s a storyteller.

Cameron was enthralled, coaching the Thunderbird train throughout the video, first “up, up, up!” and then “down, down! down!”

Suffice to say there was much cheering among our households as parents, grandparents, and great-grandparents throughout the land rejoiced in the breakthrough.

Until it suddenly hit me, “But – now he’s going to want to ride!”

One step at a time, little guy. And one coaster at a time.
___
Would you like to receive HoliBlog notices – along with news releases and sweepstakes – by email? Sign up here and you can choose whether to receive the emails weekly or the same day the blog posts are published. Thank you!