Matt, our president, recently took part in an interview with Funworld magazine.

This was soon followed by a request for his photo. Since they didn’t require a head shot – and we finally had a sunny day – we headed out to Thunderbird territory for some pops of orange in the background.

Up until this year, we’ve been a wood-coaster park. There’s no surprise about test runs this time of year – when that Voyage lift chain springs to life, you know it. And as Legend’s train slowly ascends the lift hill, it’s just about impossible to miss. 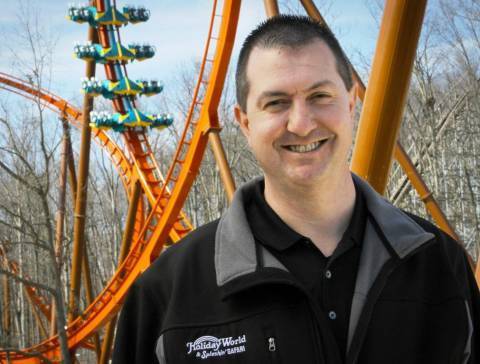 That’s right. No lift chain for Thunderbird. Instead, our new roller coaster (the first launched wing coaster in America) soars out of the station, reaching 60 miles per hour in just 3.5 seconds.

We stood – mesmerized at first – watching Thunderbird fly by us. (I could swear I heard one of the test dummies mock us, “Hoosier dummy now?” as we stood, transfixed, on one of Hyena Falls’ landings.)

Then suddenly I came to my senses: Let’s get the train in the background! Matt quickly turned around and Stephen took a few hundred more shots.

Photobombed. By a bunch of dummies.