Thunderbird’s First Flight Auction to benefit ‘Give Kids The World’

“For these historic first rides on our new roller coaster, we decided to auction the specific seats to the highest bidders,” says the park’s president, Matt Eckert. “Thunderbird’s First Flight Auction will benefit a very special organization – Give Kids The World.” 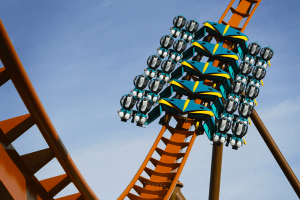 Holiday World’s auction – which runs now through April 8 – will have 20 winners who will each claim a pair of seats on Thunderbird’s first public rides. For more information and to place a bid, visit HolidayWorld.com/FirstFlight.

Give Kids The World Village is a 70-acre, nonprofit “storybook” resort, located near Central Florida’s most beloved attractions, where children with life-threatening illnesses and their families are treated to weeklong cost-free fantasy vacations. Following their vacation, families are issued a World Passport for Kids, which provides them a year of free visits to theme parks and other attractions; Holiday World is a charter member of this program.

“Supporting Give Kids The World’s mission is very important to our park’s owners and employees,” says Eckert. “Helping these families make precious memories – both in Florida and here at Holiday World – is near and dear to all of our hearts.”

Continuing Holiday World’s tradition of sending roller coasters through its thickly wooded and hilly terrain, Thunderbird at first soars and loops high in the air and then hugs the ground, with rapid-fire “near misses” such as a fly-through barn, stone chimneys, and other rides.