I know. I want to see pictures, too.

Jordan is one of our Security officers. He makes the rounds in the evening, so we often take time for a brief chat.

It makes me happy to see Jordan. My maternal grandfather was a policeman in New Haven, Connecticut. He was a “cop on the beat” until he retired. He was offered other positions on the force, but he liked the long walks, getting to know the people in his neighborhoods, and the break-time food trucks at the factories, where he could pick up a pastry or a sandwich.

When I told Jordan I’m really looking forward to the start of after-dark Thunderbird testing, he surprised me:

“It looked like a spaceship racing through the woods. It was awesome.” – Jordan in Security, who saw Thunderbird testing after dark. 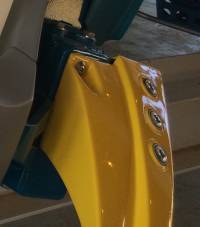 Jordan’s eyes glowed nearly as brightly as I imagine those LED lights do on Thunderbird’s wingtips.

Opening Day is just 26 days away.

The first night rides? Our Season Passholders Thunderbird Preview Night is 25 days away and will last until 10pm CDT.

Just in case you’d like to take any pictures …

One Response to “I know. I want to see pictures, too.”