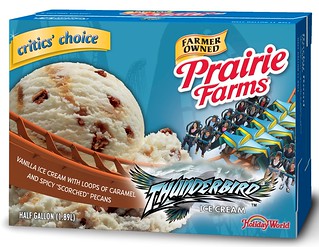 Thunderbird Ice Cream will be available at Holiday World this season, plus in half-gallon cartons at grocery stores that carry Prairie Farms Ice Cream in the Midwest, East Coast, and South.

Holiday World opens for the season on April 25; Splashin’ Safari opens May 13. For more information about the parks, visit HolidayWorld.com or call 1-877-463-2645.