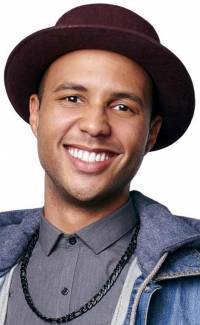 SANTA CLAUS, IND.—–A former Holiday World performer who finished fourth in this year’s American Idol competition will be at the park Friday afternoon to meet fans and sign autographs.

Rayvon Owen performed in the park’s Rejoice! show as well as the Legacy acappella group in 2011. Also a songwriter, his “Brand New Day” is featured in this year’s EPIC Praise show at Holiday World.

Park president Matt Eckert is a big fan, as he was back in 2011. “Rayvon was a ray of sunshine all season. His presence alone would light up the stage and our Guests felt his sincerity,” Eckert wrote on the park’s blog. “He takes nothing for granted, appreciates all of life’s experiences, and has never once forgotten the path he has taken to get him to where he is today.”

This Friday, June 5, Owen will sign autographs and visit with park guests for an hour starting at 2pm CDT at the Hoosier Celebration Theater. The first 250 fans will receive a photo sheet showing the singer/songwriter as a Holiday World performer and in the present day. Owen will then watch the park’s 3pm EPIC Praise show, which includes his song, “Brand New Day.”