Last Thursday was a special day – and a wild one. Just ask Wally Schaaf.

That’s exactly what he decided, and he did it big!

That morning, I watched as Wally – a resident of Scenic Hills Care Center – and his son Mike took their first flight on Thunderbird.

Here they are, strapped in and ready for launch: 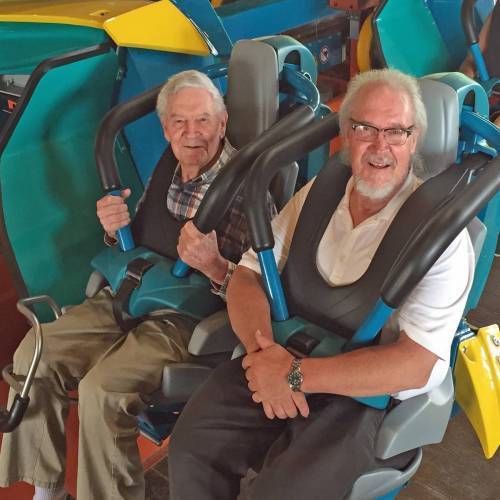 After what seemed like a long minute and 18 seconds later, they rolled back into the station.

He did it! He rode the roller coaster all but one of his fellow residents declared they wouldn’t ride.

After Wally finished his ride, we took him to see his on-ride photo. As we reached the Thunderbird Plaza and the 14-story Immelmann loop was once again in his view, he looked up at it – as another train launched – and with the biggest grin on his face, he declared, “I rode that!”

To learn more about Wally’s ride, check out this story from the Ferdinand News.