There’s such a thing as “Underwear Day.” And I guess we’re meant to celebrate that fact.

… which reminds me of a blog post from long ago. Really.

When I went into Will’s office more than a decade ago to ask him what he thought about us starting a blog, I remember how intrigued he was with the possibilities. We could tell stories and record our history.

The piece of advice Will gave me that really stuck with me was, “Tell the stories no other park would tell.”

In keeping with that tradition of blogging about unmentionables, let’s talk about rides “breaking down.”

To start, let’s clear up a misconception that has long mystified me – we don’t ever close a ride because we just don’t feel like opening it for the day. We want to have every ride open every day – and our maintenance team goes to great lengths each day (starting before daybreak) to make that happen.

Sometimes, though, during morning safety inspection, it becomes apparent that a part is ready to be replaced. Often it’s something simple, something we have on hand and can take of right away – meaning the ride can open on time, or soon after opening. Other times, we have to order a new part (and go to great lengths to get it here with the least amount of delay possible).

Still other times, we have a bit of a mystery to solve. We already blogged about the flying squirrel at Wildebeest a few years ago and explained how a “fault” is actually a good thing.

And here’s another example of what could cause a brief delay in your day.

Andy, one of our attractions managers, sent me this photo recently along with this note: This bird was thinking big. He flew in the Thunderbird station from the back and stepped his way out to the launch room – faulting the ride sensors, then flew on his way! 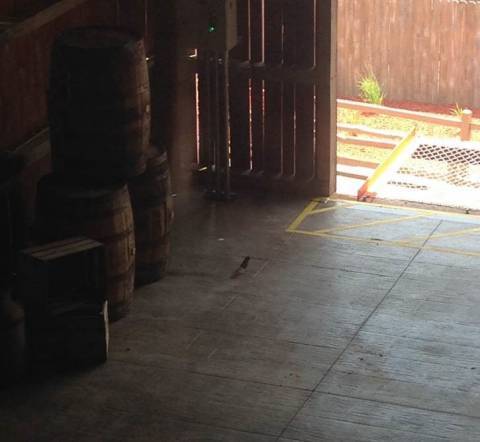 So if during your next visit here, there’s a “fault” while you’re in line, please keep in mind that we’ll do everything safely possible to get the line moving again quickly. And, since we’re not only an outdoor park – but an out-in-the-country park – sometimes that “fault” might be the fault of a bird, a flying squirrel, or other rascally little friend from nature.